Ruskin Bond is a writer of European origin who stays in Landour, Near Mussoorie, India. The purpose of this article is not to write a character sketch of the author but to analyse a city on the basis of the comparison between its description in his story ‘Time Stops At Shamli’ to the present condition of Shamli.

Ruskin Bond is famous for setting his stories in small towns, mostly of  Uttarakhand or Uttar Pradesh, both of which were a single state during his flourishing days.
I write less about what I read as it remains my personal taste. But this story motivated me to write something about it as my recorded ancestry hails from there. My dad’s childhood also passed there.
So let me share with you some extracts from his book ‘Time Stops at Shamli and other stories’. The main story itself comes on page no. 35 and carries on till page no. 66.
Click here to read another article I’ve written about Shamli.

The author was going to meet his relatives in Saharanpur, while returning from Delhi via Dehra Express. The railway engine had some fault at Shamli because of which he stepped out so as to pass his time. In real life, to pass the time, we only wander up to the station and come back, but he exited from the site itself and this can be quite hyperbolic. Maybe during his times, places were safer and crime rates were less, so he might have had that adventurous zeal with him. He found the only tonga of the town which took him to the only hotel of the town. The town is described to be deserted. Only a sugar mill was existing The manager of the hotel was Satish Dayal. Another worker was Daya Ram. A ten year old girl from neighborhood named Kiran used to come to play there. The gardener named Heera also hosted her. There were two guests at that hotel, one was Miss. Deeds (school teacher), other the Dayals and another Mr. Lin (businessman from Calcutta).
The town is described as stuck in bankruptcy. Satish hadn’t got his salary of Rs. 50 per month, since last three months, because the hotel wasn’t earning. Miss Deeds owed Rs.50 on her whisky alone but couldn’t pay because her school couldn’t pay her salary because the students couldn’t pay their fees.
Heera complained to the author about the probability that a leopard took their dog. Author helps but was not successful.
After a few scenes, a woman named Sushila emerges in the picture. This has left me quite confused. Who was she and how did the author love her right from her childhood? There has been less description in the text in regard to this. She was married, anyway. However, she places the condition to author that if she is present at the railway station before him, she will come with him; if she wouldn’t be there, then he should go without a second thought.
Finally, at railway station, the author finds that Sushila didn’t arrive. He then left for his home.
I guess you must read the story yourself to have the enjoyment.

Whom was the narrator of Time Stops at Shamli supposedly looking for in the station of Shamli?

He introduced himself as an author and gave an excuse of searching for his supposed friend, Major Roberts. However, no person in his knowledge existed at all. The figure was hypothetical.
Though, it is unclear from the story itself about why he made his mind to explore shamli, following can be some speculated reasons.

Only for five minutes. It did this every time, even when no one stepped down the carriage. At one point of time, there were some technical problems with the engine mending which took more than fifteen minutes. Finding an opportunity to explore, the author stepped down.

It is quite ambiguous from the text about who Sushila was and when had author met her before, but, it might be a possibility that the author might have entered into the town to meet his lover.

Why did Sushila in Time Stops at Shamli not turn up at the station?

Sushila loved the author but, since she was married, it was her confusion about what to do.

She was also not interested in obliging him either. Hence, she told him that if she turns up at the station, they can elope together; otherwise, the author would have to depart alone.

The mill which the author mentioned in the story is still existing. It was gifted to Sir Shadilal’s family by Britishers. Though, it is still running in a good condition and provides employment to a lot of people of the area, today it is not the only source of employment.
Various other businesses are coming up. Markets have been established.
Mayawati, who was the CM of Uttar Pradesh from 2007-12 transformed it into a district, separated from Muzaffarnagar and renamed it as Prabudhnagar. A year after that, Akhilesh Yadav, the next CM, renamed it back to Shamli.
Today, there are no forests in Shamli as is mentioned in the story. There might be some unreserved forests in the surrounding villages.
Shamli is no longer deserted as traffic is a problem in almost all the cities of India.
Less foreigners are to be seen these days as Miss Deeds and Mr Lin are mentioned in the story. There is a negligible population of Christians in the city. However, there are a few convent schools of colonial era.
Economically, Shamli is not bankrupt now. Western UP is today, one of the most prosperous areas of the northern India. 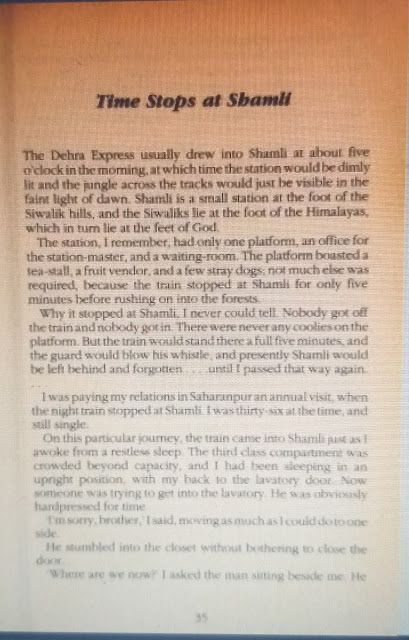 How did you feel about this article? Was there any point, you feel I missed out. Do let me know in the comments.