Skip to content
The Hindi month of Saawan is going on. This is the season of showing devotion to Lord Shiv, playing on swings, drenching oneself in the rain and fasting. This fasting/upwas/vrat is done by people of almost all the age groups, especially in India and other countries with a significant Hindu population. However the type of fasts vary from person to person. Some people prefer fasting on monday only; some prefer the entire saawan; while the types of fasts also vary.
On Shivratri, I uploaded a series of stories asking my followers if they knew about the food items specific to fasts. Many of them didn’t even know. This inspired me to share this as my blogpost.
The diet I’m discussing for fasts is basically for people who’re opting for Phalahaar, a diet which consists of fruits and their products.

6 Substitutes For Cereals To consume During Fasts. 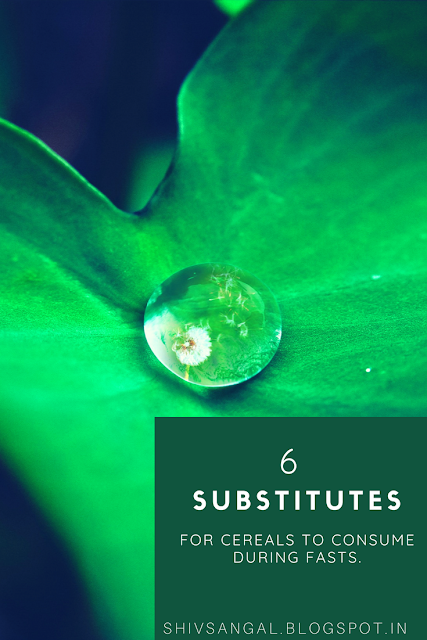 This product is derived from the sap of the root of the cassava plant which is solidified and then shaped into small spherical balls. People fry them to make chips, papads and khichdi from this.

It’s a fruit which grows in water. Some species grow in the same way like weeds and mushrooms but nowadays people have started raising living by growing them.
Chestnut is of two kinds – Soft and Ripe.
The soft chestnut is tasteless but has a fruity flavor which is usually eaten raw.
The ripe chestnut is also tasteless but it doesn’t have the fruity flavor. It’s is boiled and consumed with lemon juice, chillies, spices and other condiments( just like you consume sweet corn).
Chestnut is also dried and powdered to make flour. It is used as a binding agent in cutlets, rotis etc.

This species is basically a weed which grows along with the rice crop. The seeds of this crop are identical to rice grains, though smaller, in flavour. They’re thus used in place of rice during fasting days. They’re also used to make kheer.

This is a plant cultivated because it yields seeds which are similar to grains but differ in grain like properties. China and Russia have topped in the production of this commodity as buckwheat provides warmth after consumption.

This plant yields seeds which have a high quantity of starch. Not only seeds but leaves of the plants are also used. Several curries are made from the leaves. Sweets like laddoos can be made from the grains. They even help in losing weight.

These nuts are derived after roasting the seeds of lotus flower. They provide many nutrients and are tasty too.

Some myths related to keeping fasts.

1. You can consume tea while fasting.

I’ve seen a number of people consuming tea while fasting. But let me tell you, it’s prohibited to consume fermented foods while fasting. So you can’t consume tea, coffee, chocolate or anything that is fermented.

Keeping Phalaahar fast is not easy. In hinduism, people are free to choose the kinds of fasts they keep. If they keep phalaahar, it’s their decision. You can’t point them out.
If you liked this article, please subscribe.