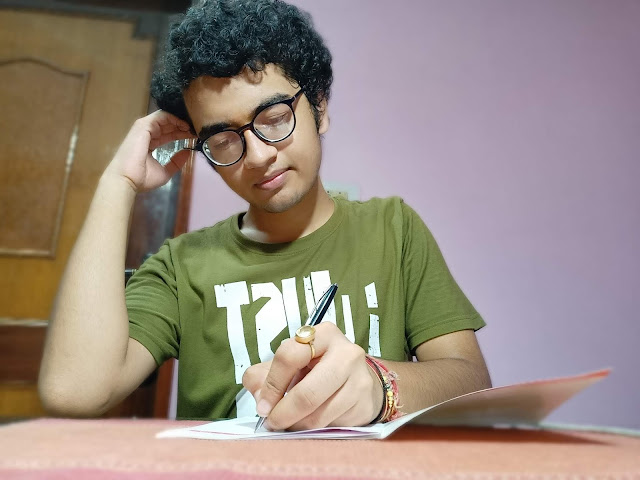 You might have noticed that I’m uploading my instagram captions in both English and Sanskrit these days. Ever wondered, what happened or what’s the reason?
I must explain the climax of my Sanskrit mania just like any TV serial.
The story began when I just changed my college. Mom and Dad had come to drop me at my new college and there on the notice board they saw a poster which informed about various classes on different foreign languages starting from Rs. 2k to 6k. My parents insisted me to pursue those courses. I said, I will think about them.
After, they departed, I started to think about the prospective languages I could learn. I had learnt French when I was in eighth standard and now I don’t have a speck in my mind. To learn any language, it’s extremely necessary to keep practicing and communicating in it. Without it, the language is lost.
I thought that learning of foreign languages might secure a job in MNC for me. Other than that, I didn’t find any use of it. Moreover, if I don’t get a job, the money spent wouldn’t be worth it.
Then, an idea clicked my mind. Why shouldn’t I learn the origin of all the languages? I decided to learn Sanskrit. Learning Sanskrit is easy and cheap in India. Let’s talk about Sanskrit here.

Why You Should Learn Sanskrit?

As an Indian, you’ll be able to learn sanskrit in relatively less efforts as compared to any foreigner. Sanskrit words and grammar are directly or indirectly the part of almost every language particularly of Indian Languages. So, you’ll find it relatively easy.
Moreover, communication is also possible in India.

Learning Sanskrit requires the usage of all of your facial muscles and vocal cords. It can treat your problem of stammering or tote. It can improve your pronunciation.

Sanskrit is the soul of our culture. All of our primeval religious and social literature is written in Sanskrit. It was the language of the courts before middle eastern and western influences.
These days, people are oriented in such a way so as to feel ashamed in embracing their culture.
By learning Sanskrit, you’ll break all those indoctrinations.
It is written nowhere and is thus ultimately false that Sanskrit is just for the Pundits or Priests. Religious literature is for everyone.

4. Your Own Point of View

Some people say that why would they learn Sanskrit when they could read translated texts. But, let me tell you that whenever, you read any translated text, you lose two things. First things first, you aren’t able to appreciate the beauty of the writing style. Secondly you automatically inherit the viewpoint of the translator.
For e.g. To puzzle up Ganesh ji, Mehrshi Ved Vyas composed 800 such shlokas in Mahabharata such that they interpret into a complicated and different meaning everytime they’re read.
If you read in Sanskrit, the opinion is your own.

I think, I don’t need to explain this point. You must research it on your own. Google about all the universities and schools in abroad where Sanskrit is taught. You’ll be amazed by the stats. In many management colleges, Bhagvad Gita is taught for boosting the leadership skills. Sanskrit is used in research work. It’s demand is increasing day by day. If you’ve it in your resume, it surely is going to have a great impact.

1 thought on “5 Reasons Why You Should Learn Sanskrit”