Skip to content
Note: All The pictures are mine, using them without prior written permission is an offence.
This trip was indeed an accomplishment for us.

We’ve till now covered all the twelve jyotirlingas, four dhams and saptpuris(seven holiest cities of India). Besides these, we’ve covered twenty out of twenty-nine Indian states.
So, today I’m sharing with you, 6 divine cities of India which we covered in this trip and perhaps you should also definitely plan to visit them.

Visiting this place was not our principal program this time, but we’ve visited it three times before (2007, 2010 and 2013). This time we visited Banke Bihari Temple only.
The entire Mathura district has 5000 temples and 10000 Ashrams and Mutts. So telling them is not possible.
But If you have enough time, visit Kadamb ka ped, Yamuna, Nidhivan, Govardhan, Nandgaon, Gokul and Barsana.
I’m telling this to you out of my personal experience as I’ve visited these places with my family. Otherwise tourist places in entire Vrij are nearly infinite. 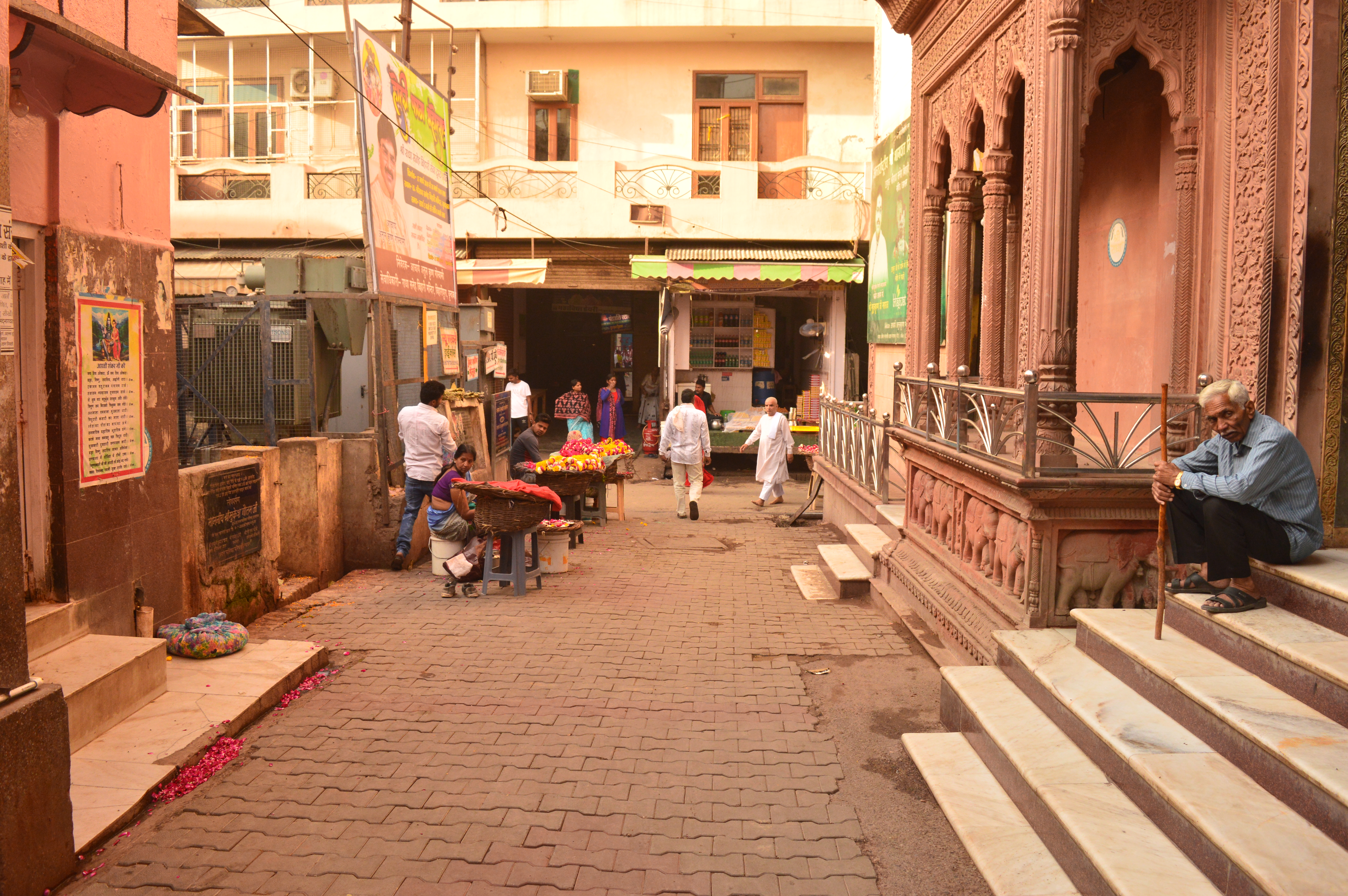 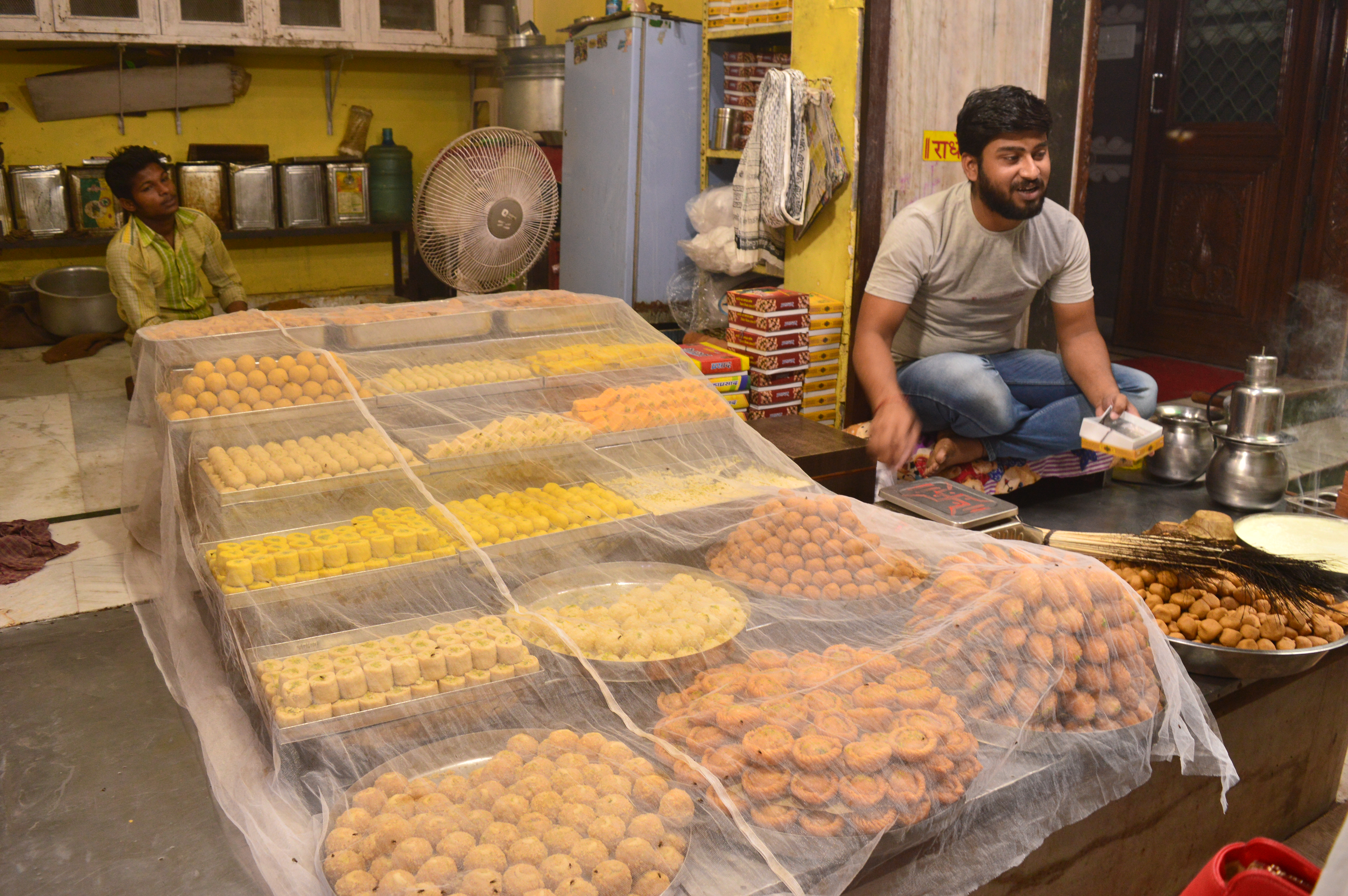 Note: In Banke Bihari Temple, Photography is not allowed. However, there is no prohibition on cameras and phones being taken inside the temple campus. Also, beware of monkeys if you wear spectacles as they may snatch them. 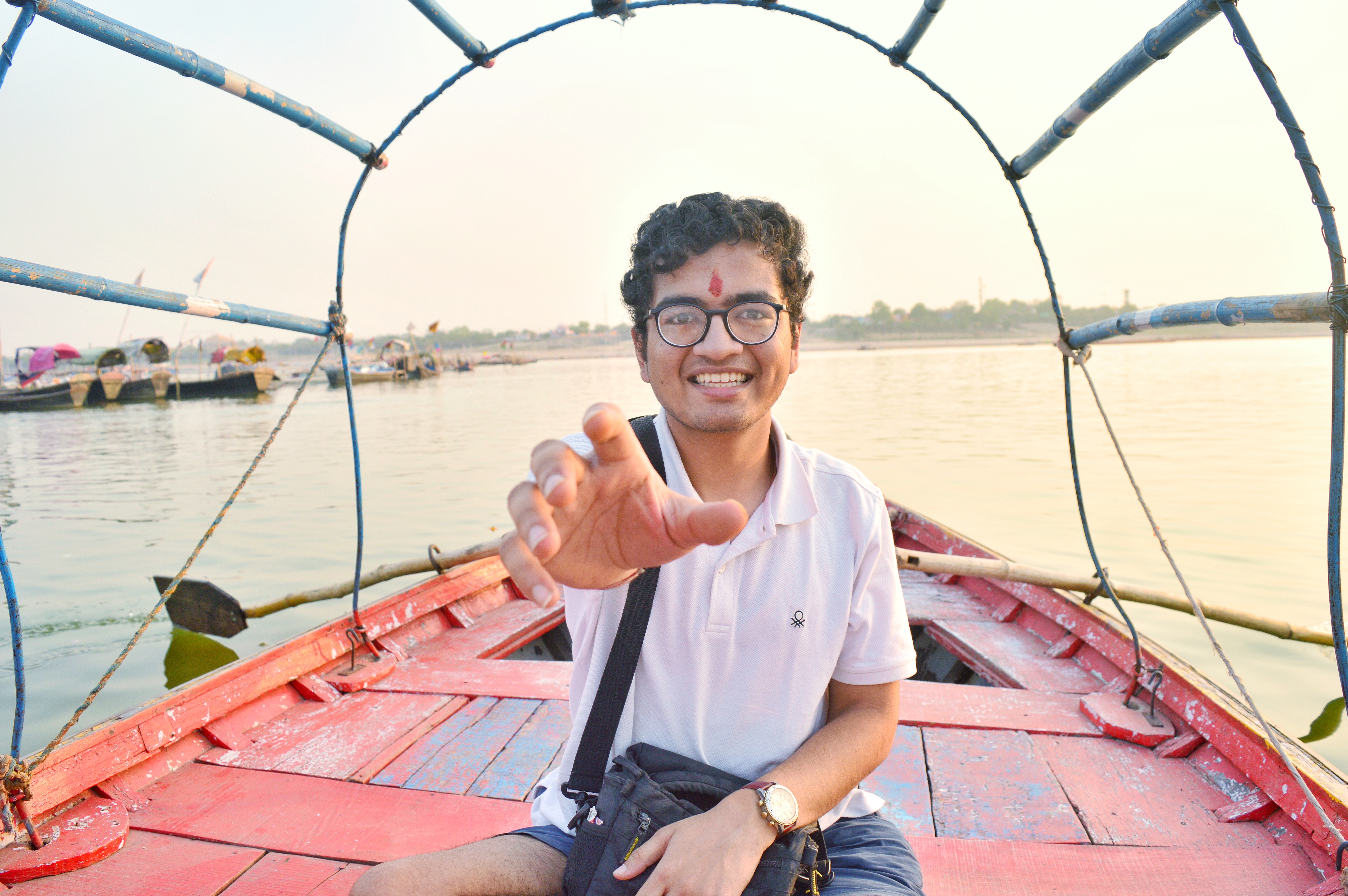 Previously Allahabad, this is a beautiful city. This city is also full of temples and various monuments related to freedom fighters, but the epitome of this city is just one and that is, Sangam. Here, Ganga, Yamuna and Saraswati rivers meet each other. Sangam is on the outskirts of the city.
Around the rivers are kilometers long stretches of sand on which people pitched tents which acted as transient shops and ashrams. 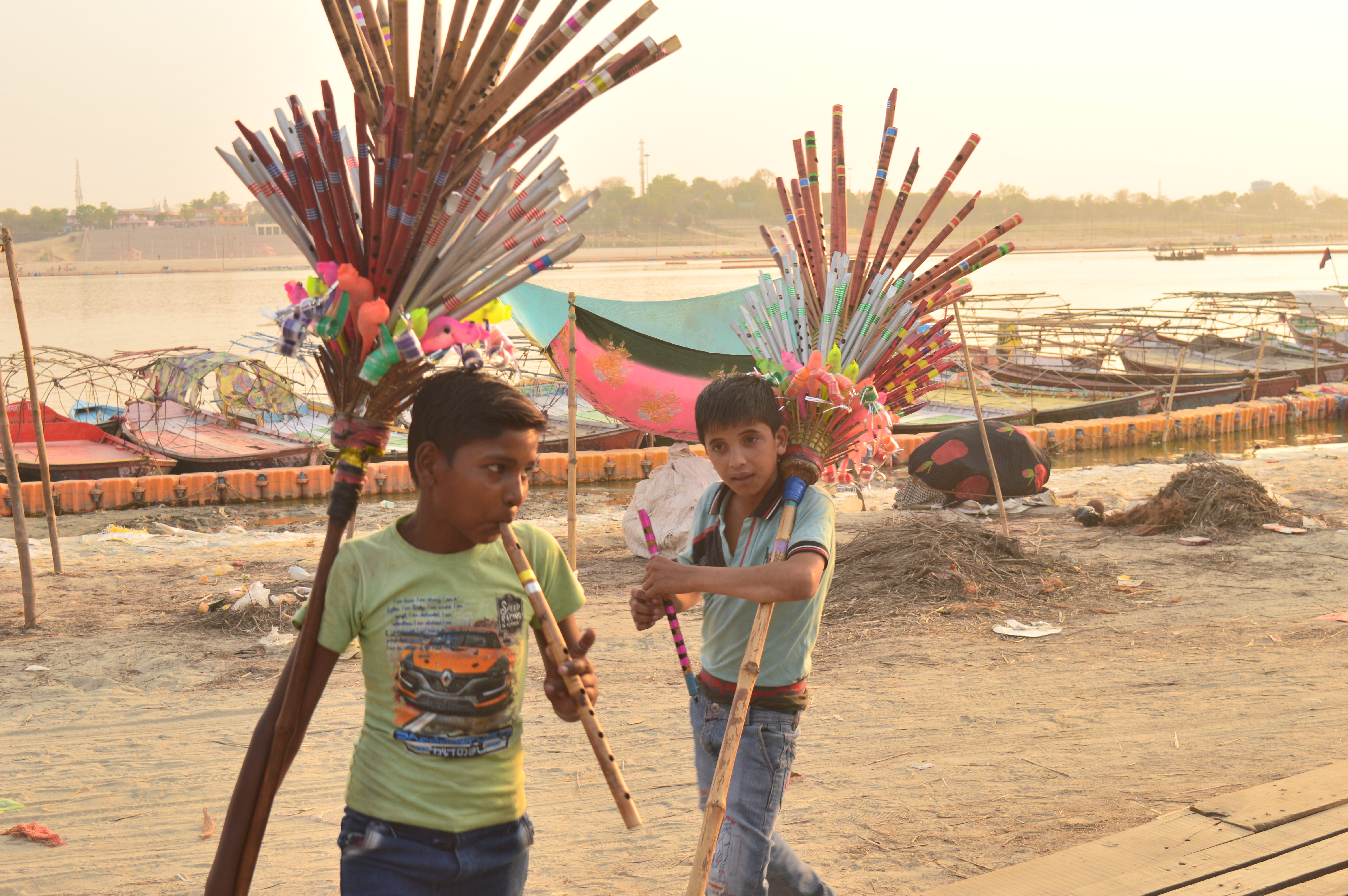 The sight is lovely to watch. To visit this place is a fortune. We were more blessed to visit it during Kumbh. Kumbh mela runs till Vaishakhi.
We visited it on the day of Nav Samvatsar. 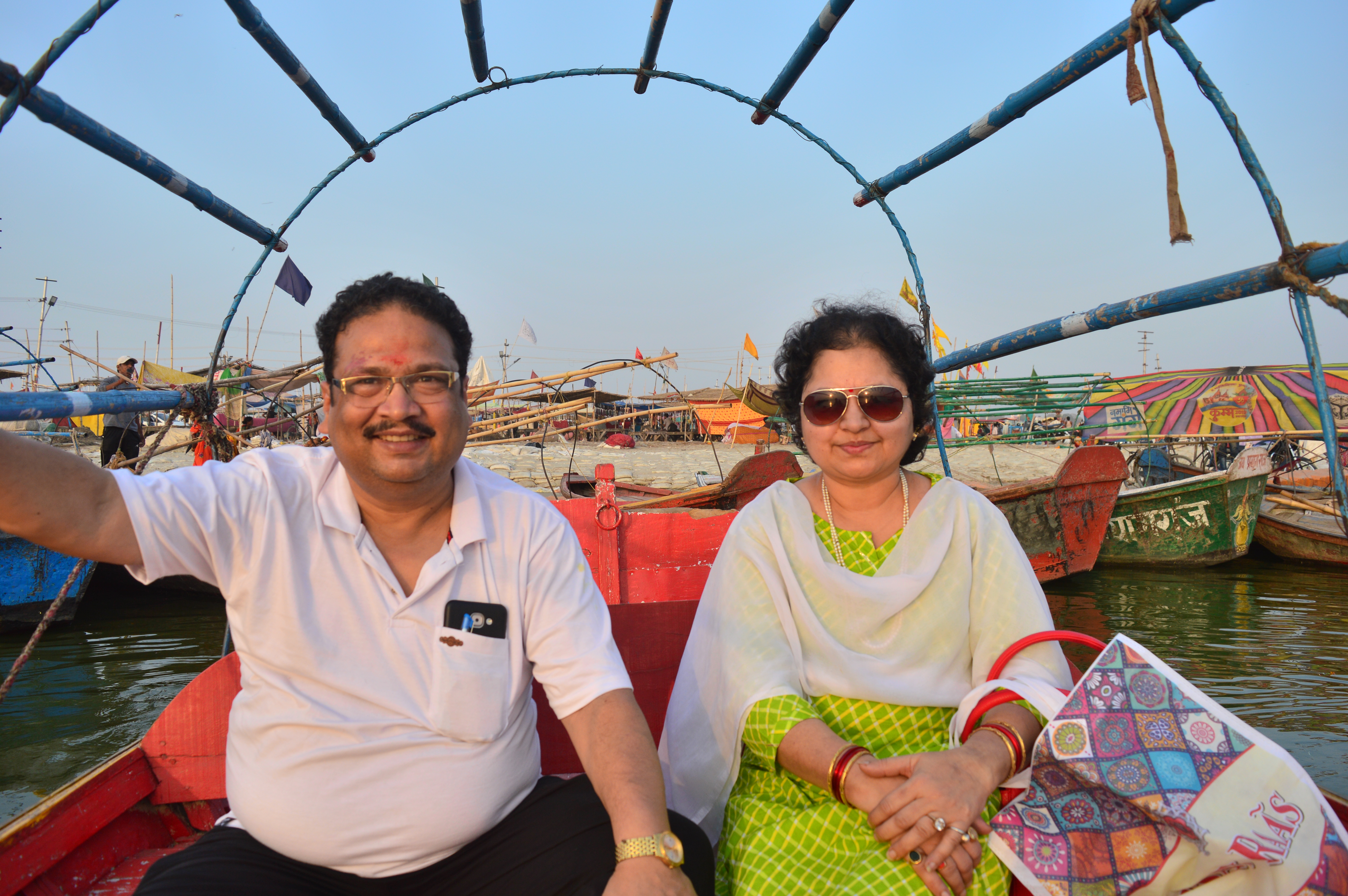 It was the time of sunset, the sky was yellow. Travelling on a boat was fun. Many people were bathing. Ducks were paddling and quacking. I tried clicking their picture but it blurred and while travelling you hardly have a chance for a second shot. 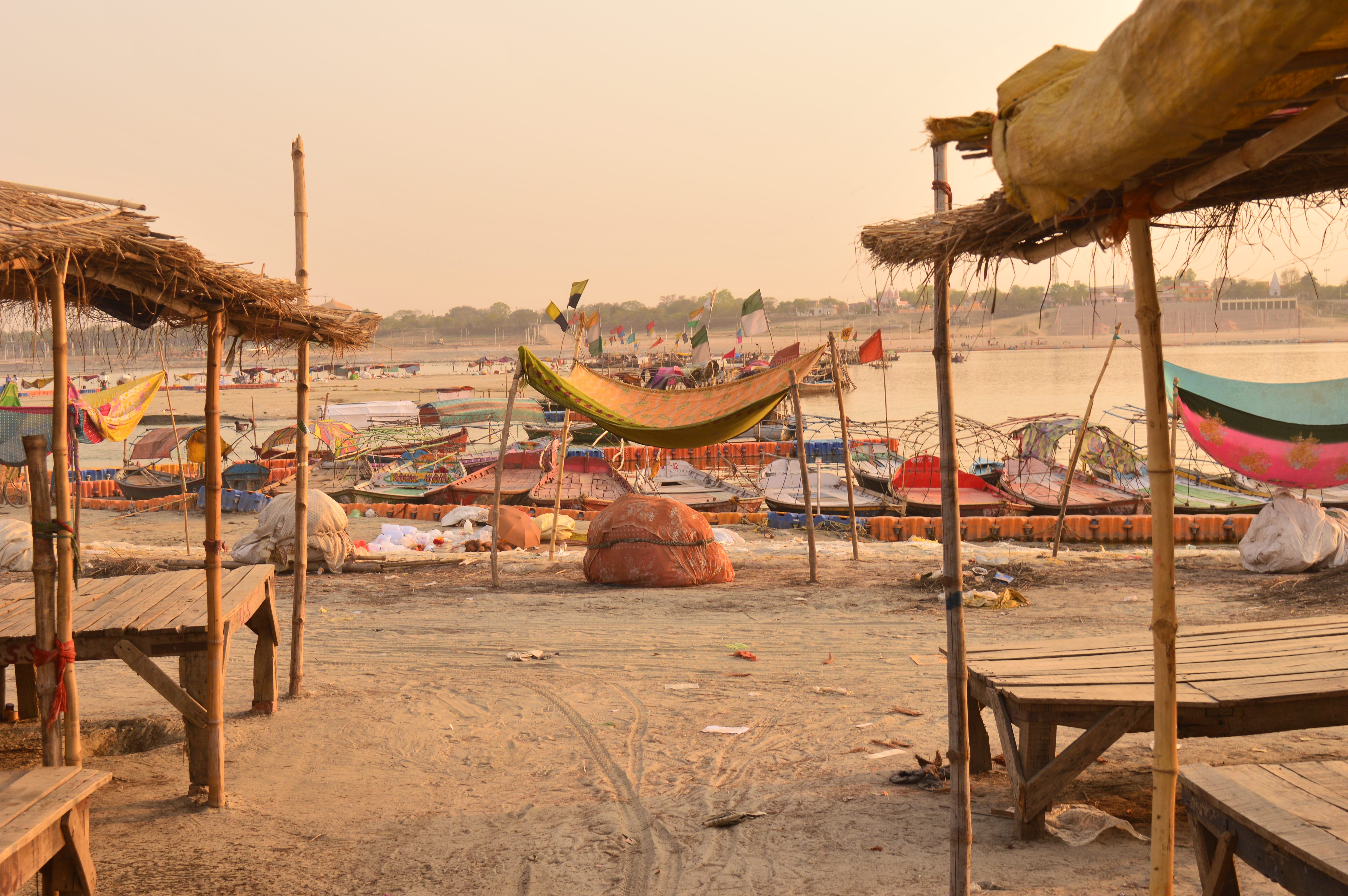 If you expect the place to be surrounded by ghats adjacently and river flowing in between, then you’re wrong. There’re no ghats. You’ll be taken through boats in the middle. You’ll have to stand on the wooden slab and bathe. You can also give offerings to surya devta, your pitra etc. 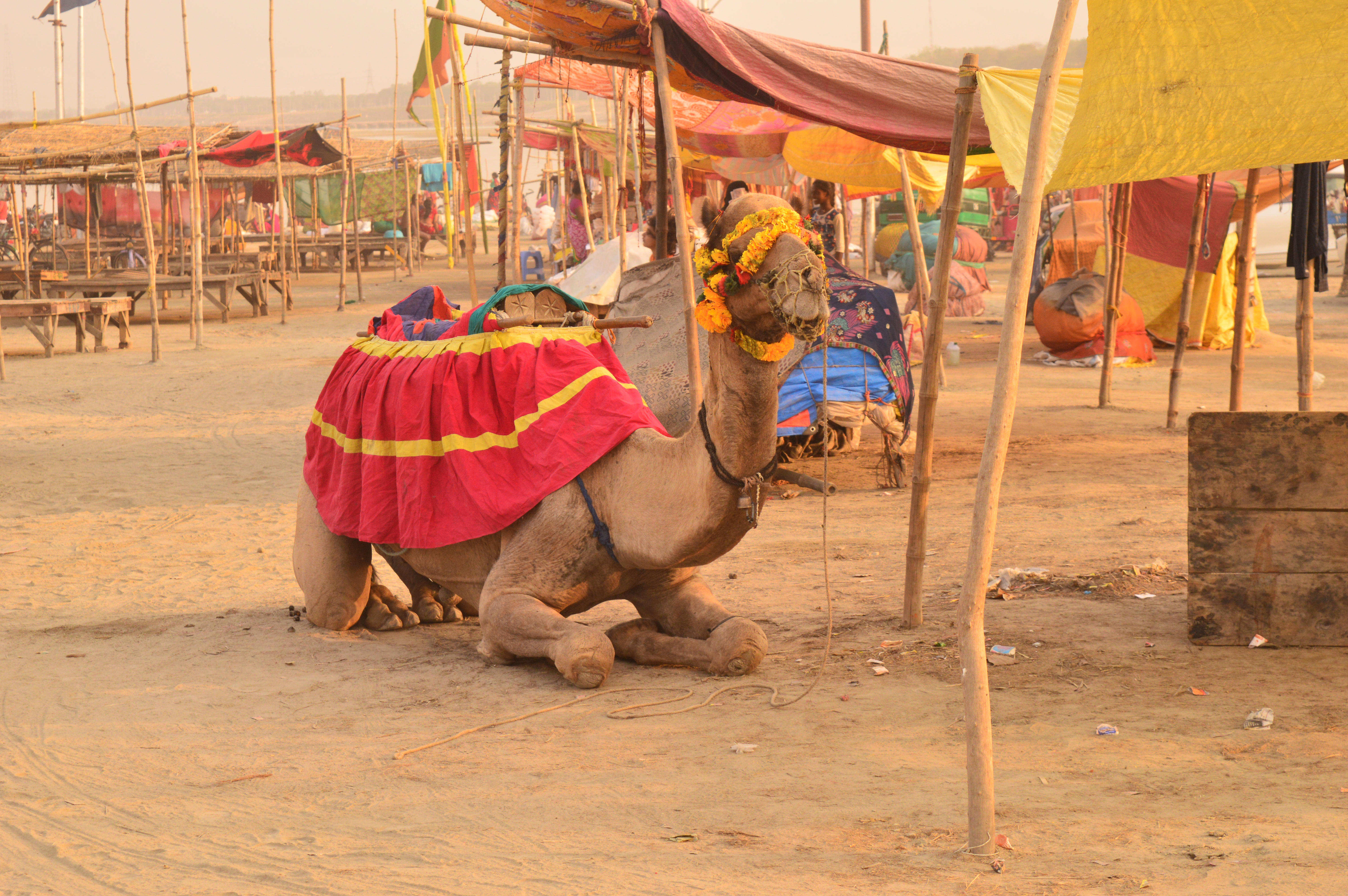 Even if you can’t speak these, har har gange or jai maa triveni are enough. 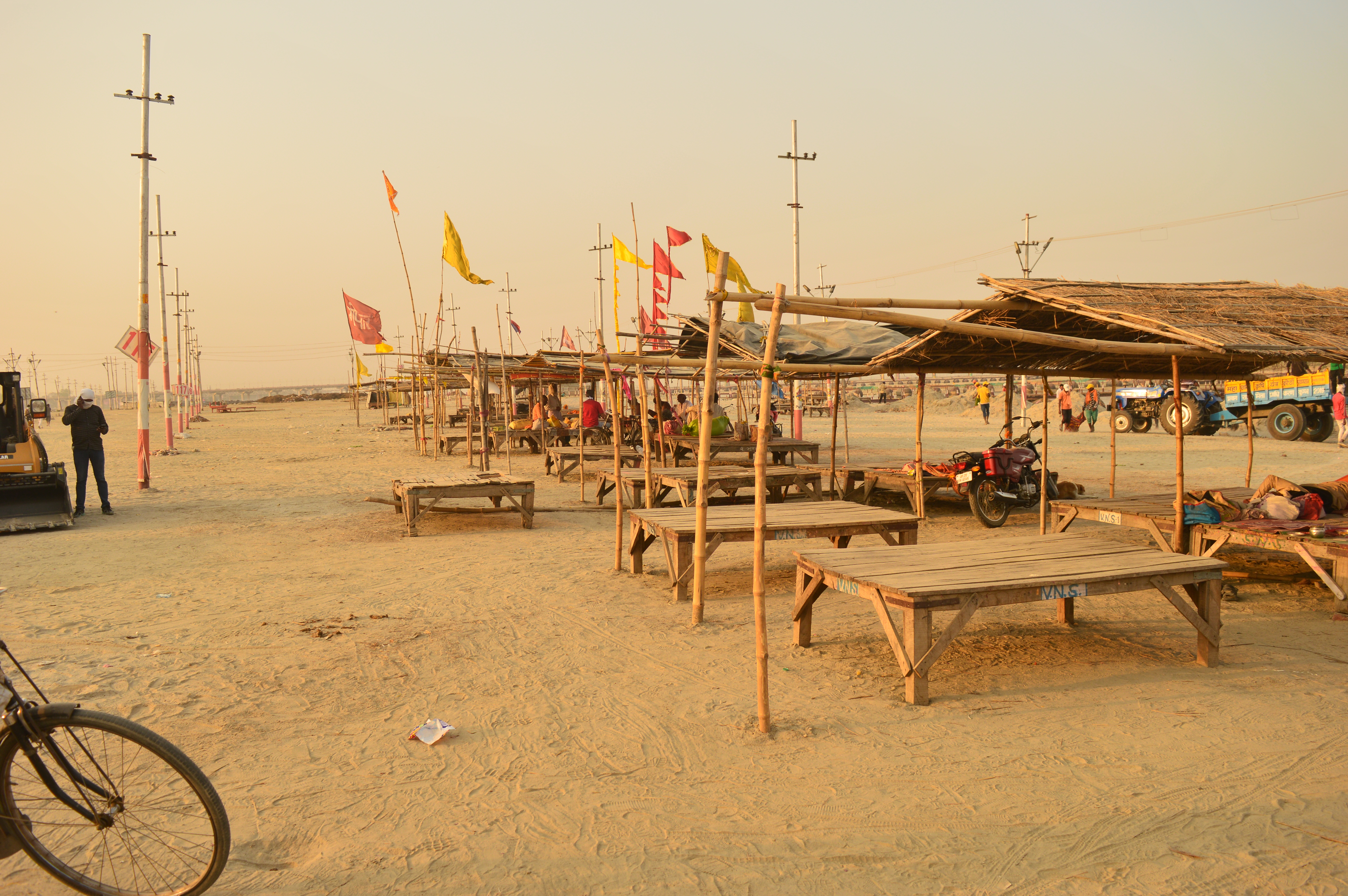 Secondly, I don’t want to defame anyone as the petty shopkeepers are the breadwinners of their families, but if you take the offerings from your home beforehand it would be better.
I saw with my own eyes that the coconuts which we offered to triveni mata flowed back to the shopkeepers who picked them up and resold.
As per the scriptures, offerings can’t be resold or offered more than once. 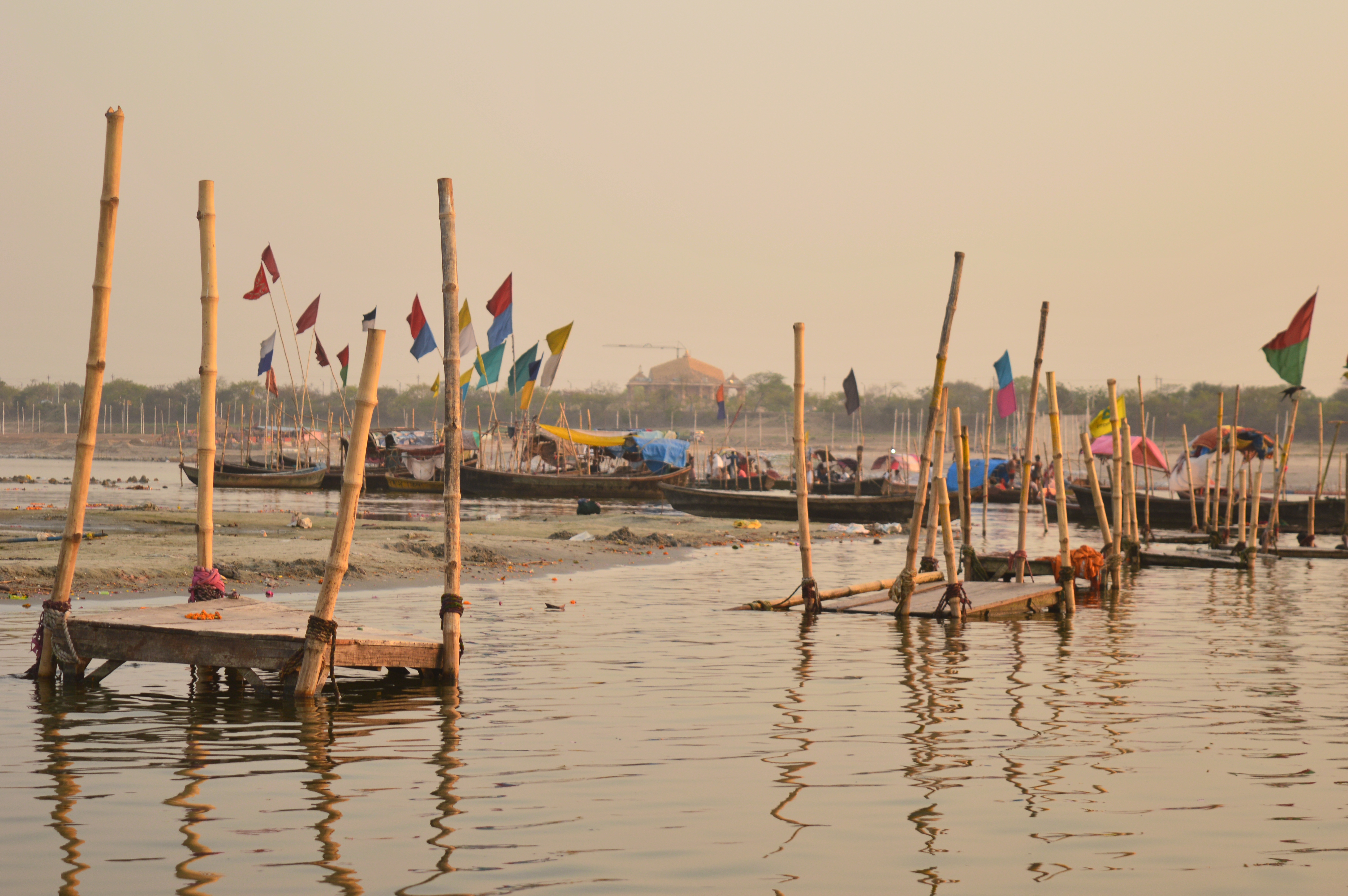 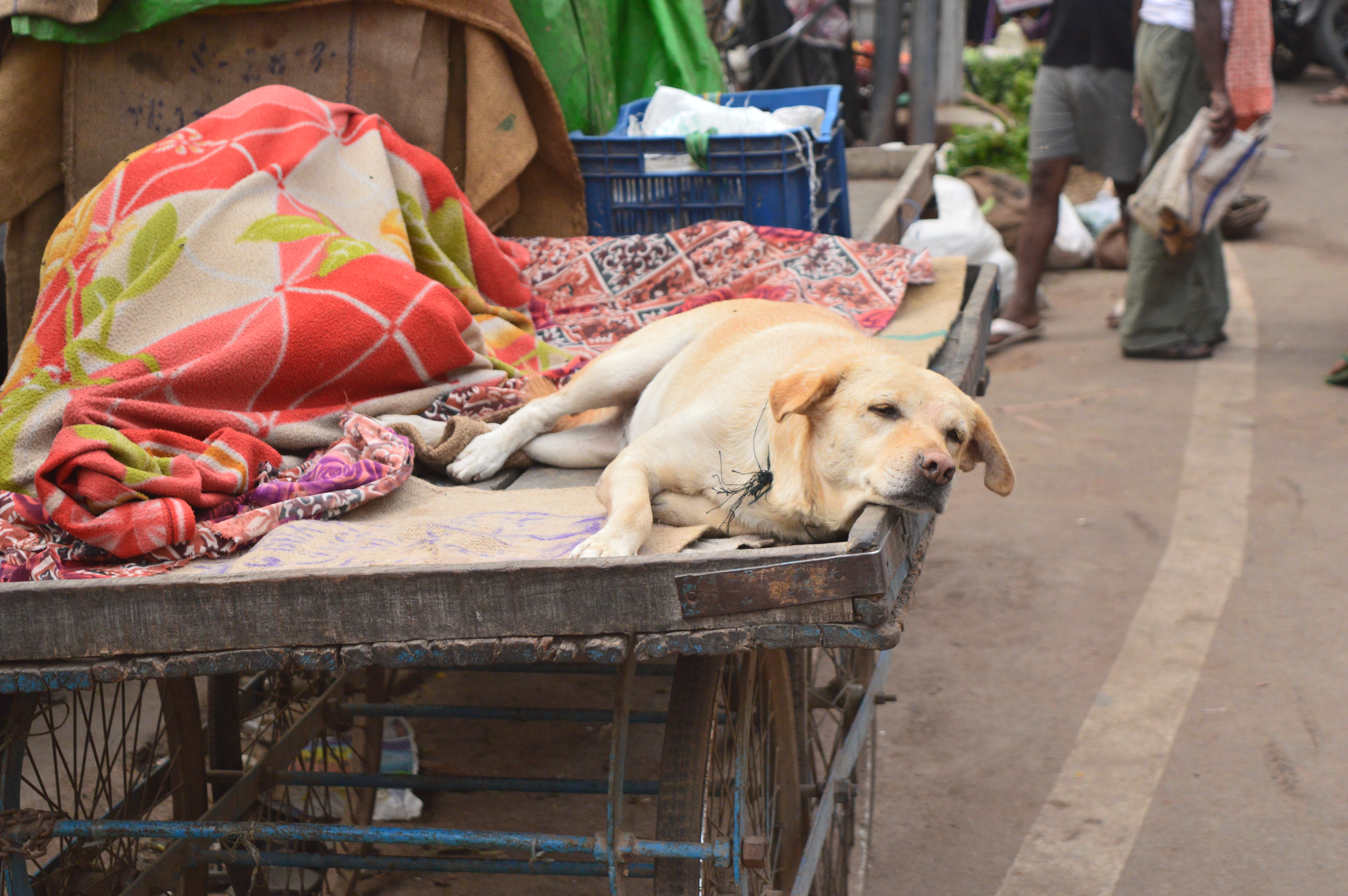 Also known as Varanasi(varuna river+ assi (eighty) ghats), this city is a metro city of the past which is believed to be setup by Shivji himself. You’ll come to know this by the vibes of this city itself. 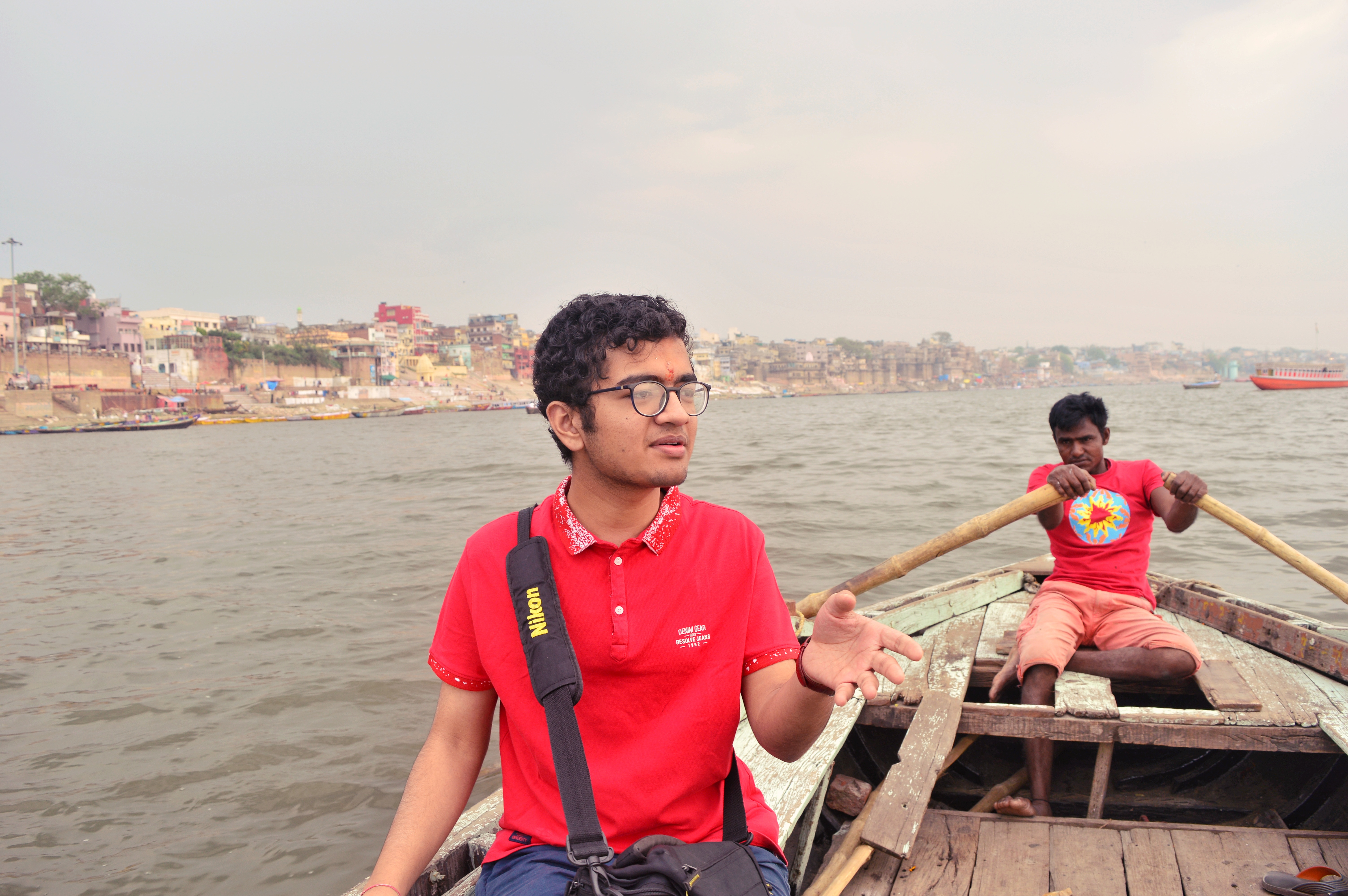 How We Did The Sightseeing Of Banaras/Kashi/Varanasi in Just Four Hours? ( And You Can Too) 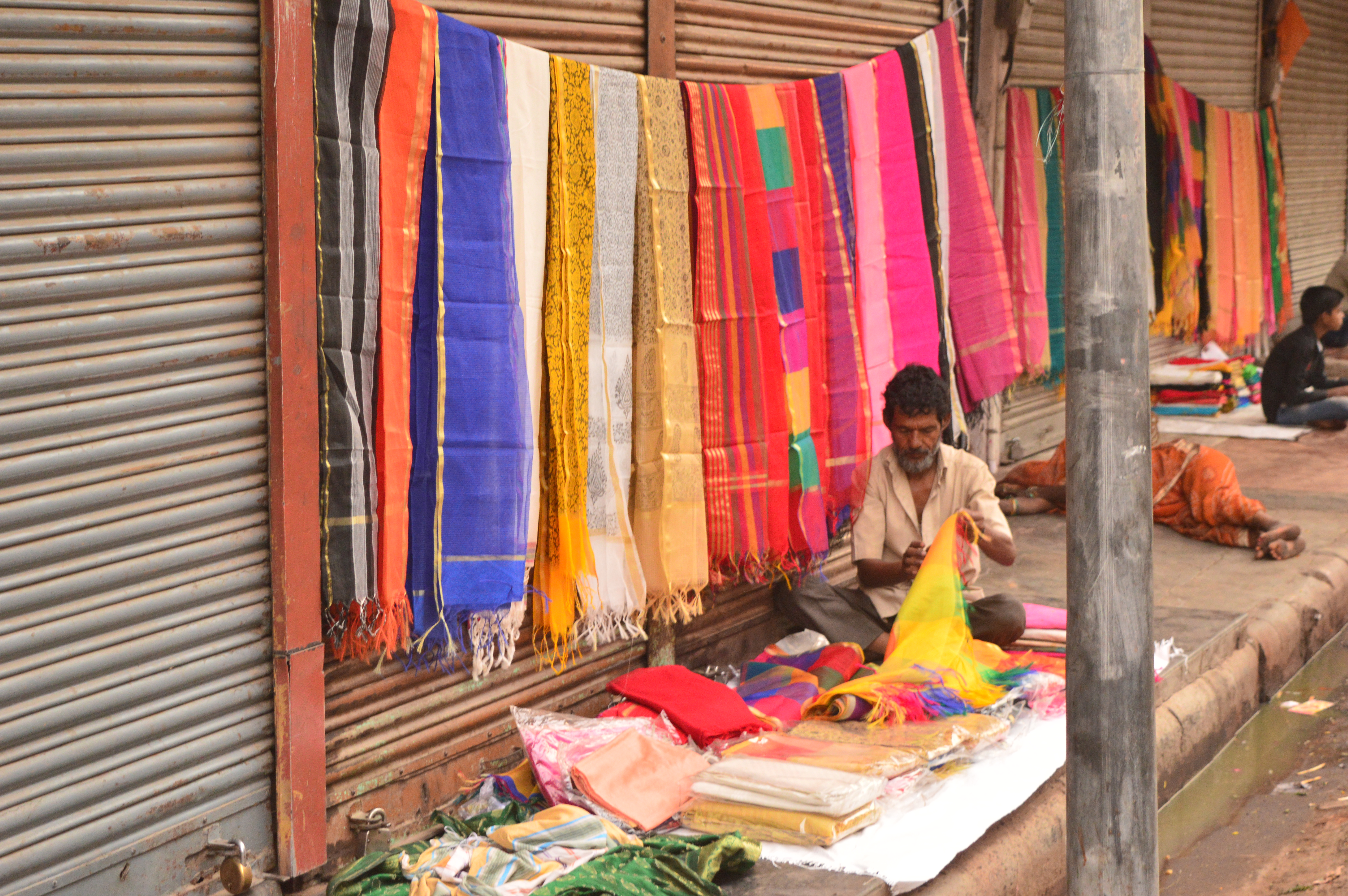 I don’t know if you’ll believe me or not, but we did our entire sightseeing of Kashi in just four hours.
Here is WHAT WE ACTUALLY DID. 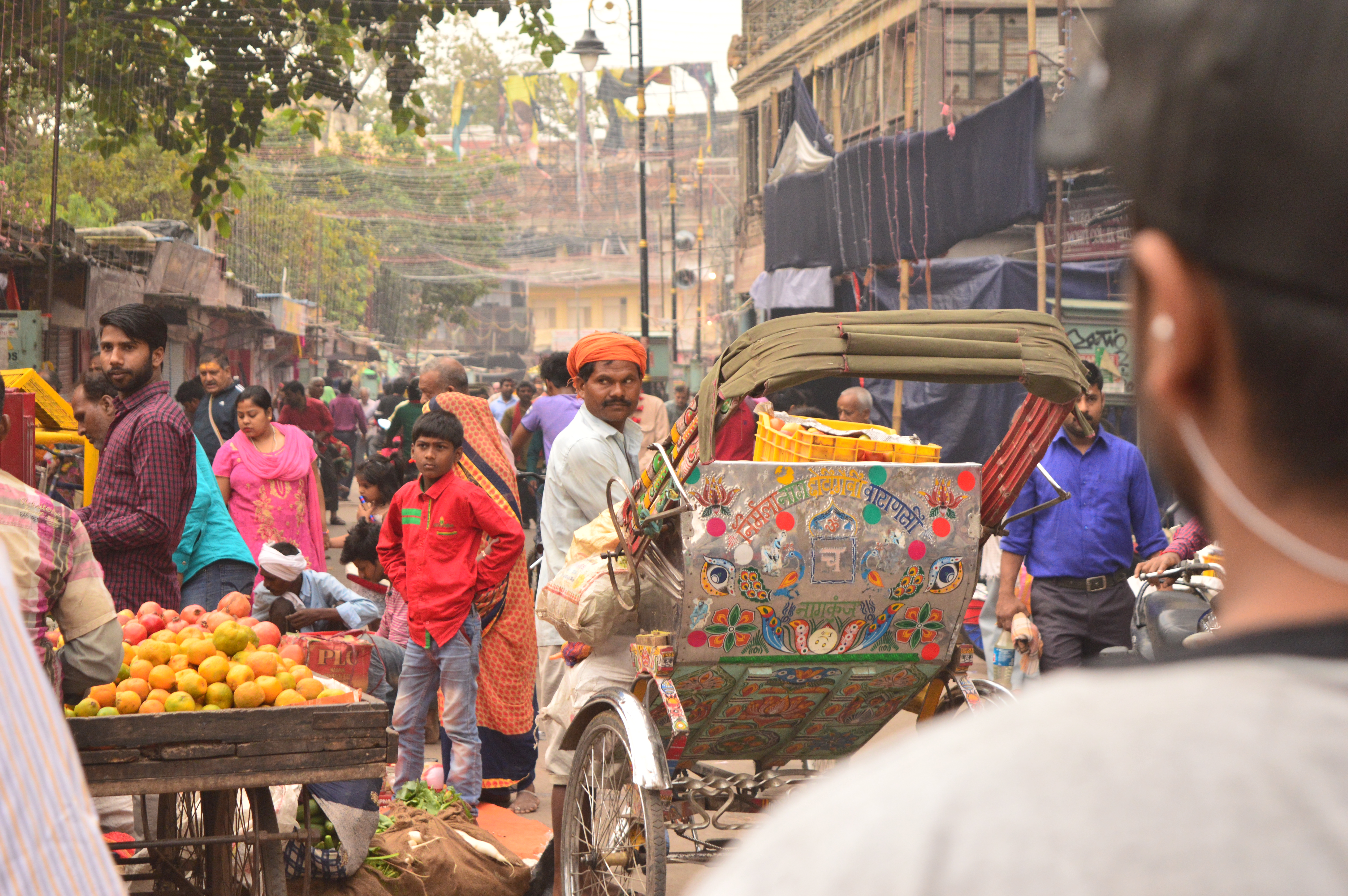 Woke Up At Four A.M

4-5 A.m is a time which is very auspicious among hindus. This is known as Brahm Muhurt. During this time, one who wakes up, bathes, meditates, prays or does anything auspicious is blessed.
We woke up in brahm muhurt for the morning darshan.
In this way we also escaped the crowd. We got the darshan in barely 15 minutes. 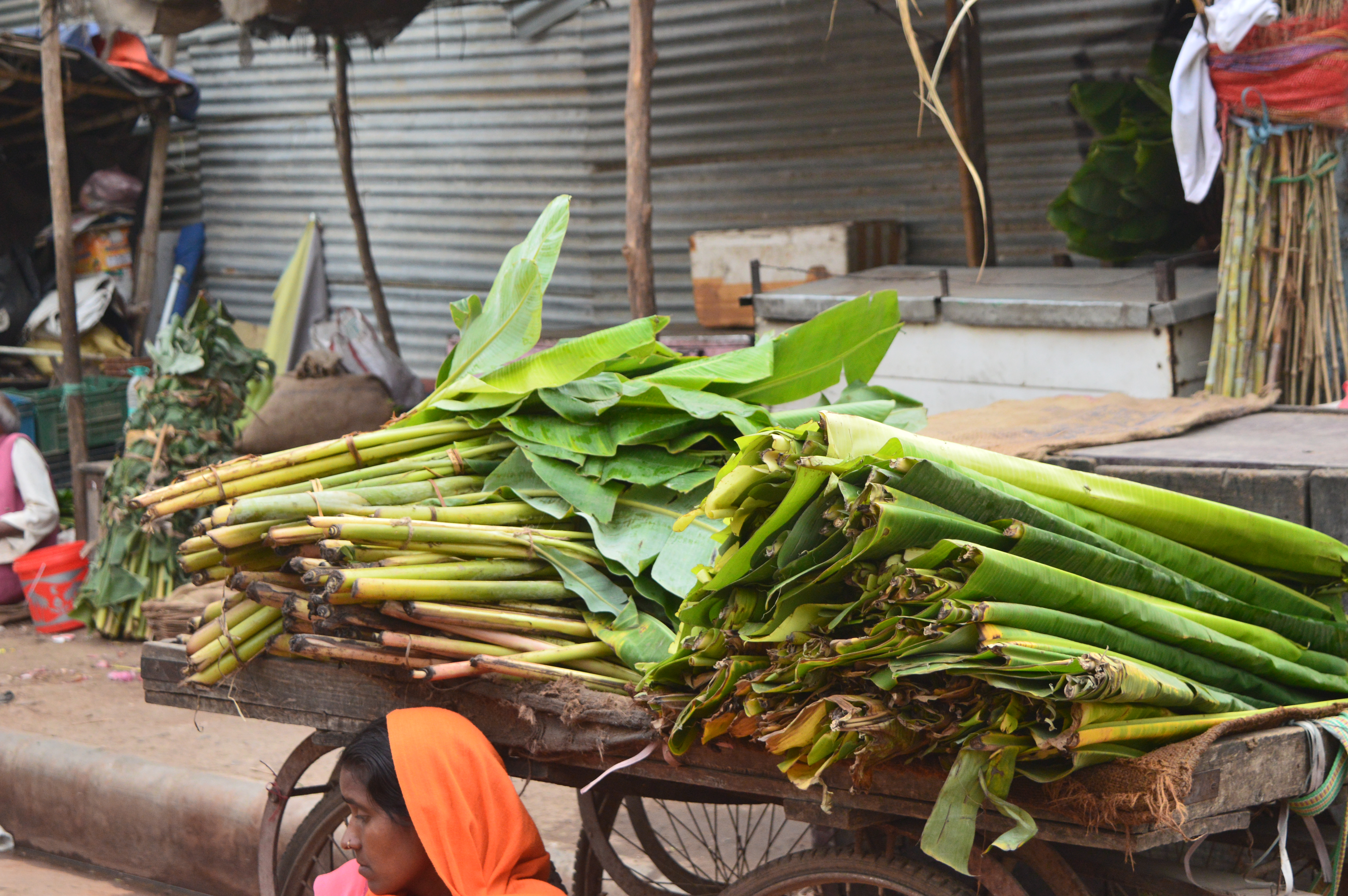 Hotel Near The Temple.

Kashi Vishwanath Temple is the pivot pilgrimage of the city. We took our hotel just one k.m away from the temple. 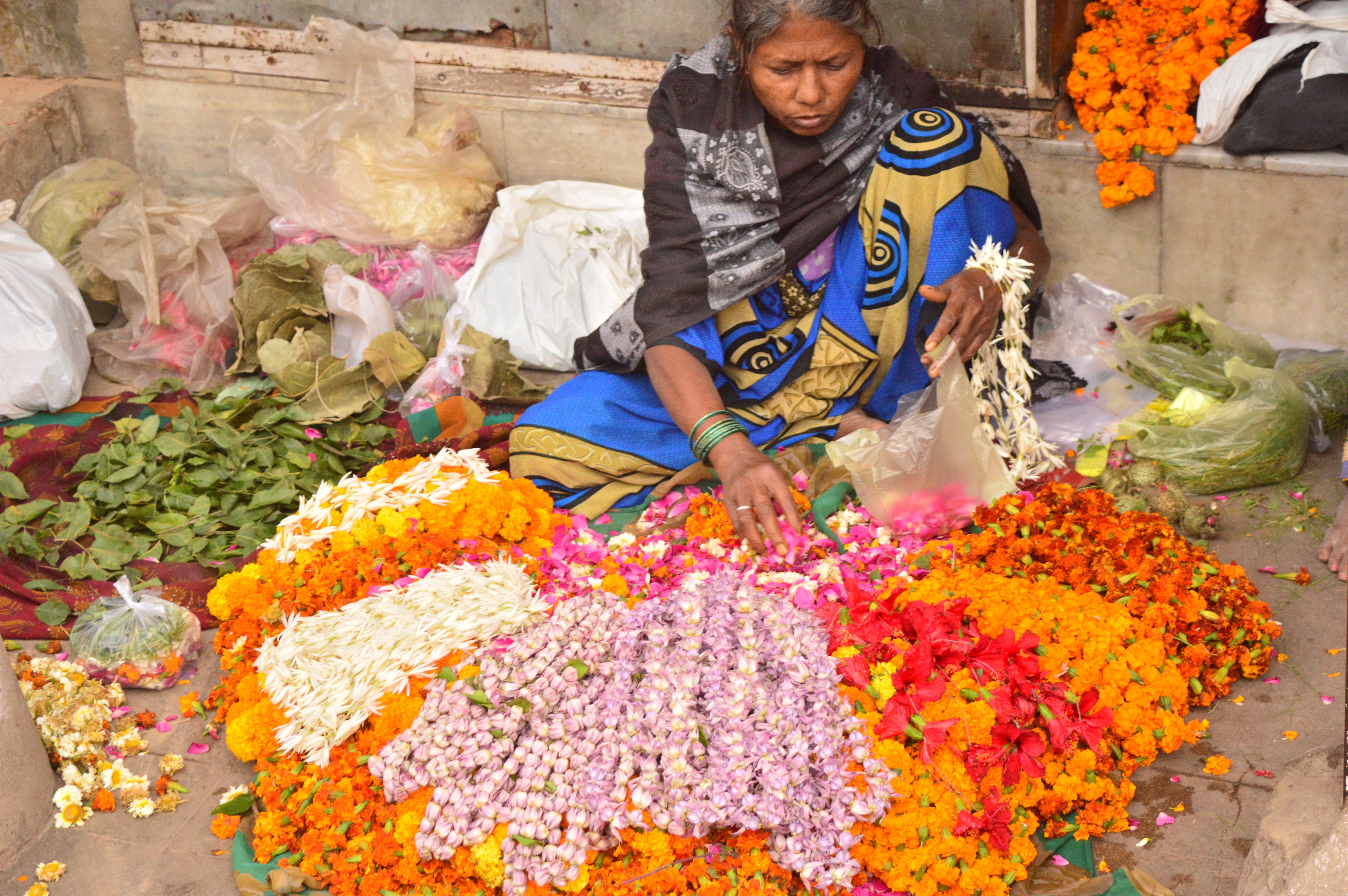 Auto rickshaw drivers usually are insiders so they know various shortcuts which can save time. They also give suggestions of various places around.
We visited six main temples. 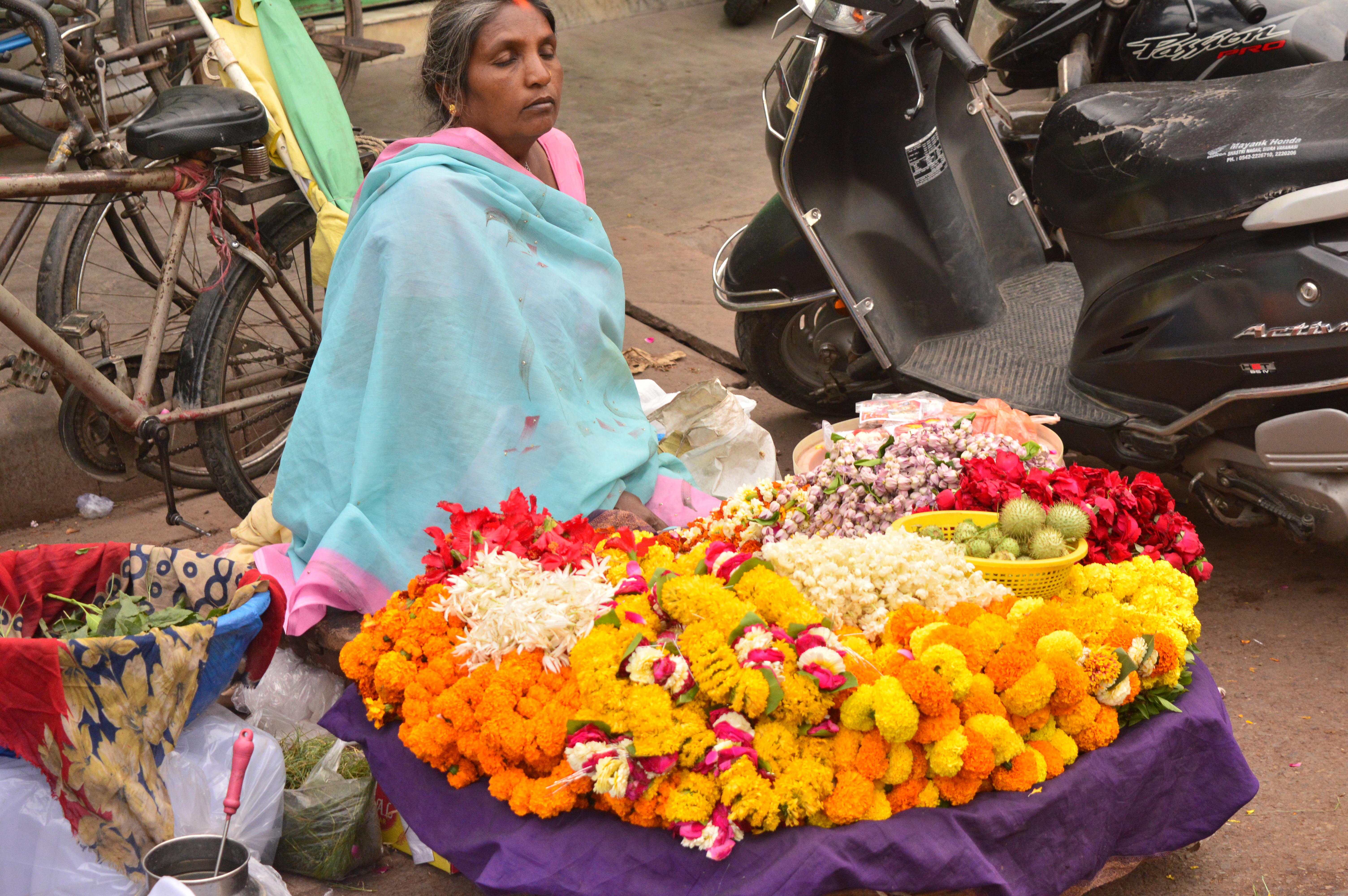 We visited the ghats in the morning after completing our darshans. 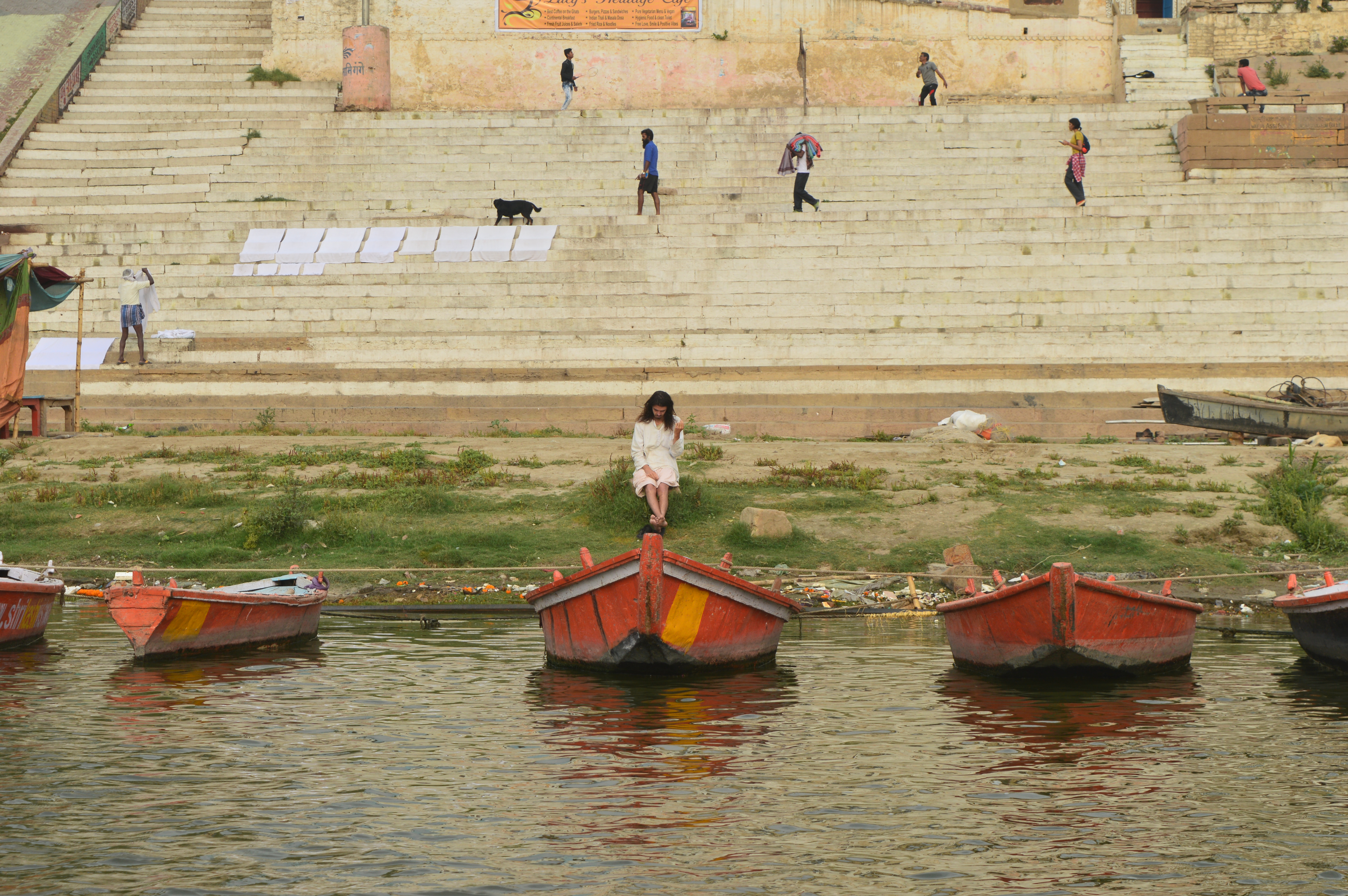 Around 8 am, we had our breakfast which was Puri, Sabji and jalebi. 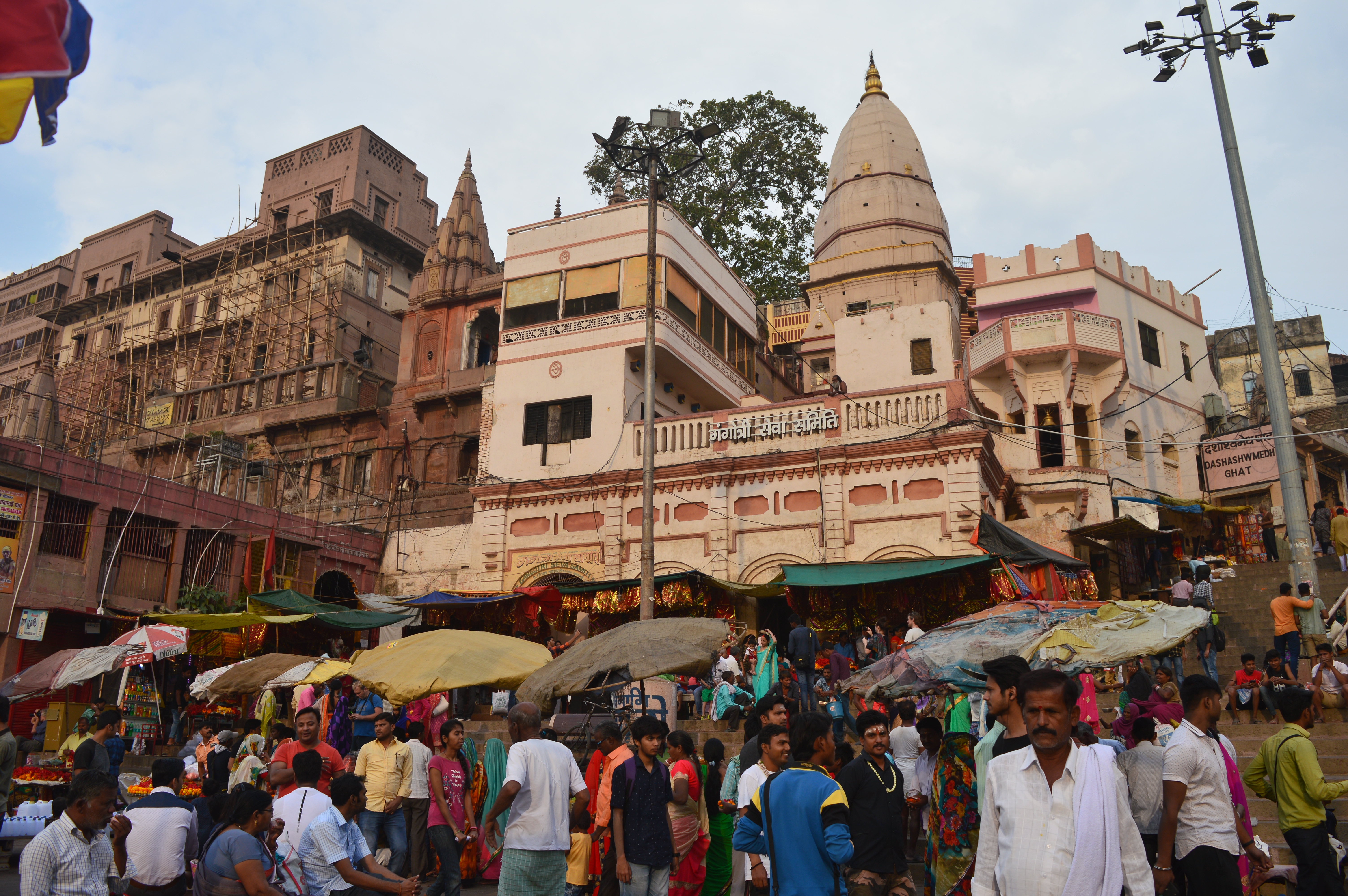 It is one of the twelve jyotirlingas and you must visit it. There is no dress code. Phones aren’t allowed.

This temple is just near the Vishwanath Temple. She is the goddess of food, so you must also visit her.

Darshan of Shivji are incomplete without Bhairav. So you must also give this temple a visit.

This is where Tulsidas composed Ramcharitmanas.

It is a famous temple of Lord Hanuman.

This is a beautiful devi temple.
I can’t share pictures as phones are not allowed inside the temples. 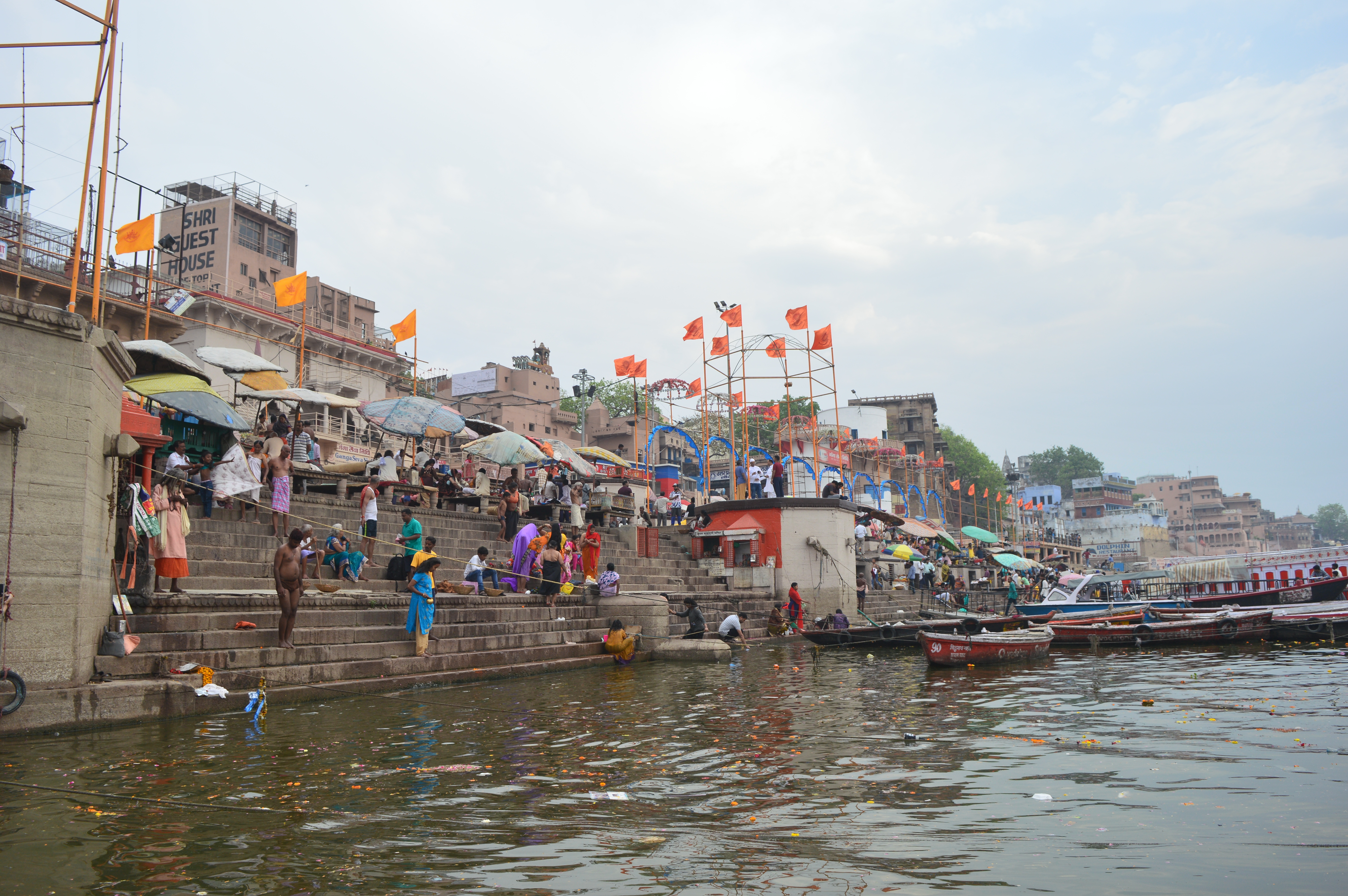 Ghats are eighty in number. On the bank of each ghat, any building/temple of historical significance stands which can be individually visited (I don’t suggest it for 4 hour stipulated visit). People can visit on the other side of the river parallel to the desired ghat to bathe in case of crowd.
You needn’t compulsorily visit eighty ghats. There are packages of thirty or sixty ghats as well. 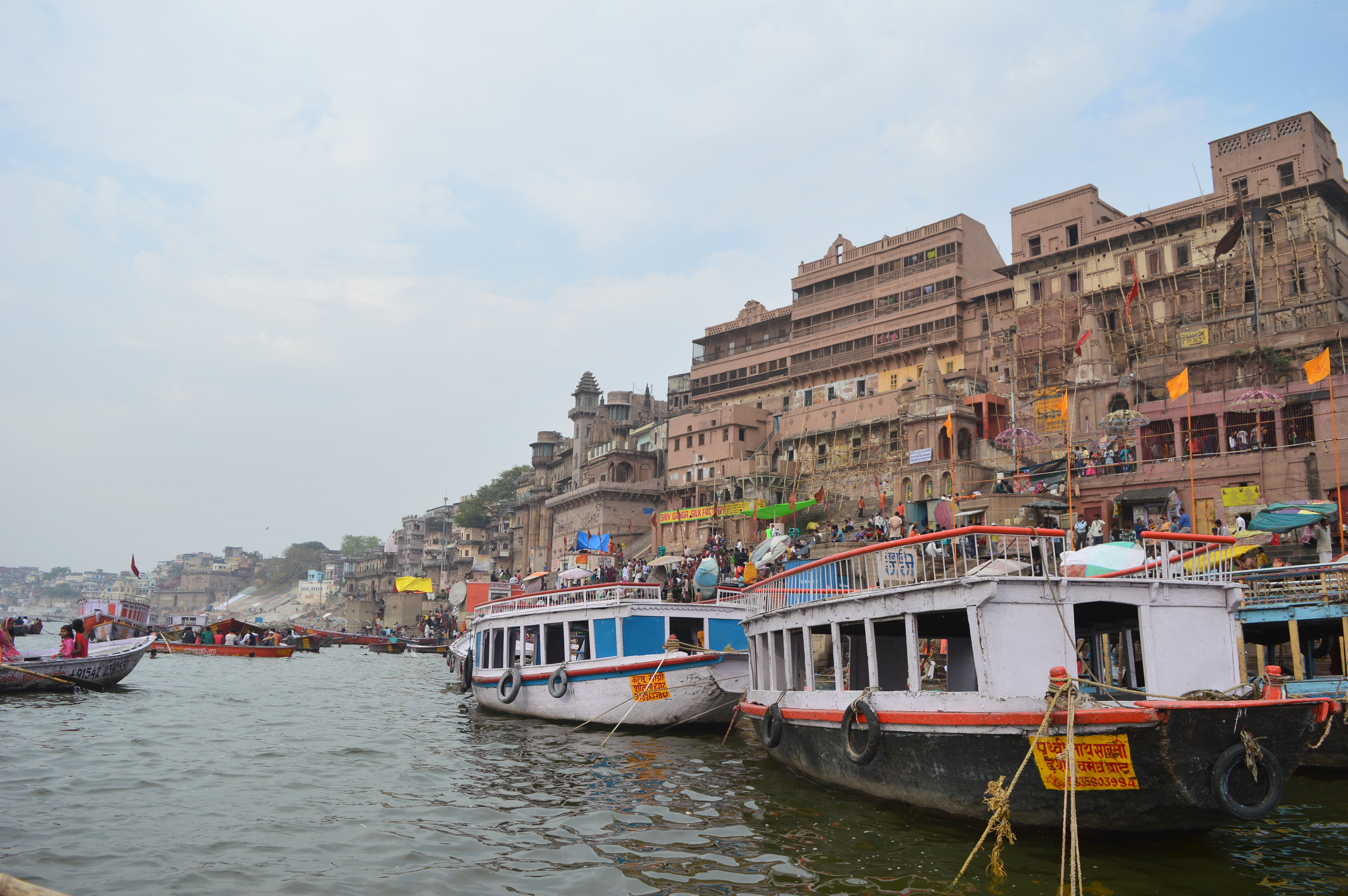 This district lies in Jharkhand. I don’t have many pictures to share of this place. Fearing lest cameras be allowed there, I didn’t take it in the darshan. However they’re allowed. Dad took his phone there and he clicked. But I didn’t find it blog worthy. In the temple we hired a photographer who didn’t click well. Printouts are worthless in this age. And even after promising, he didn’t whatsapp us those pictures.
Well! Deoghar is famous for it’s Vaidyanath Temple which is a jyotirling.
Rush is heavy. I suggest you to hire a priest. he’ll serve well.
Ladies must tie their dupattas around their waist as they might suffocate in crowd. There is no dress code.
During Chhat and Diwali, there’s no rush. And During Ashad, Shravan and Bhadrapad, Rush is at it’s heaviest.
Couples can get a thread tied from the top of Shivji’s temple to Parvati’s temple. 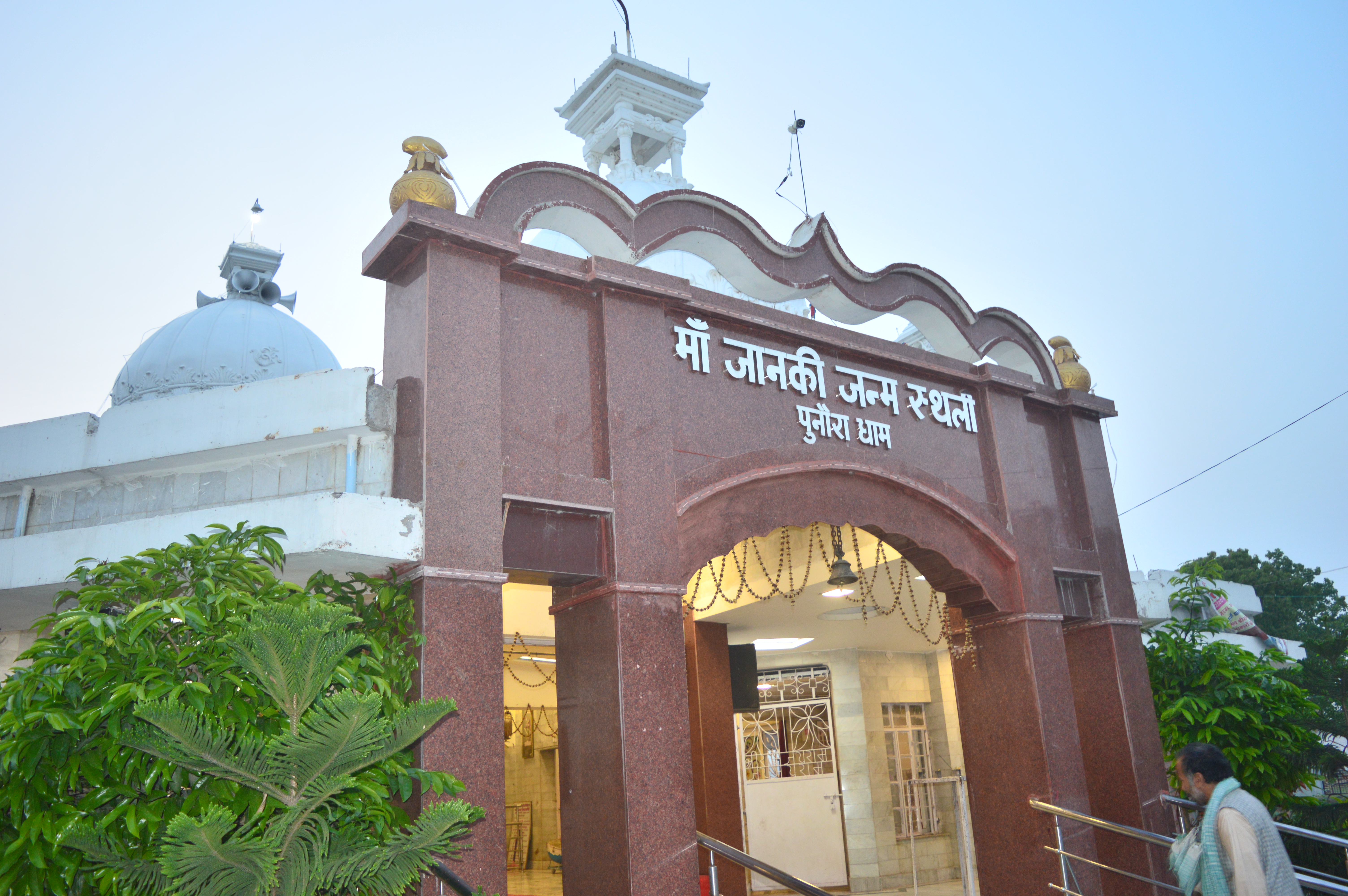 This District is situated in Bihar and borders Nepal. This is the birthplace of Devi Sita, but we didn’t know that. Our visit to this place was accidental. Before this we believed that Sitaji was born in Janakpur. But actually, this is the place where Maharaj Janak ploughed the fields.
This is a beautiful place. 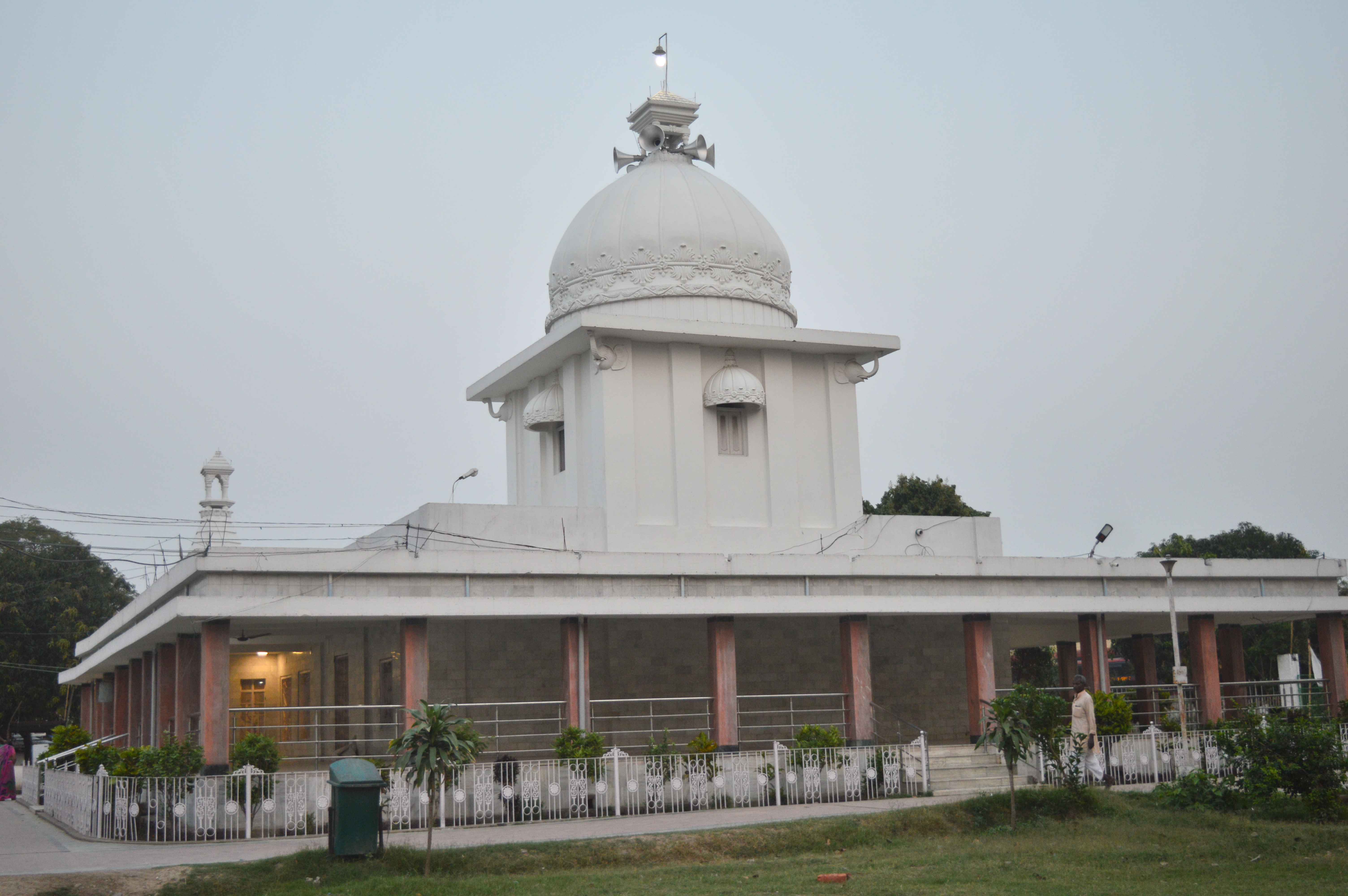 At the janmsthali is now a beautiful white temple. You’ll have the darshan of Ram, Lakshman, Bharat, Sita, Urmila and Mandvi.
Near the temple is a pond with staircases in four directions. 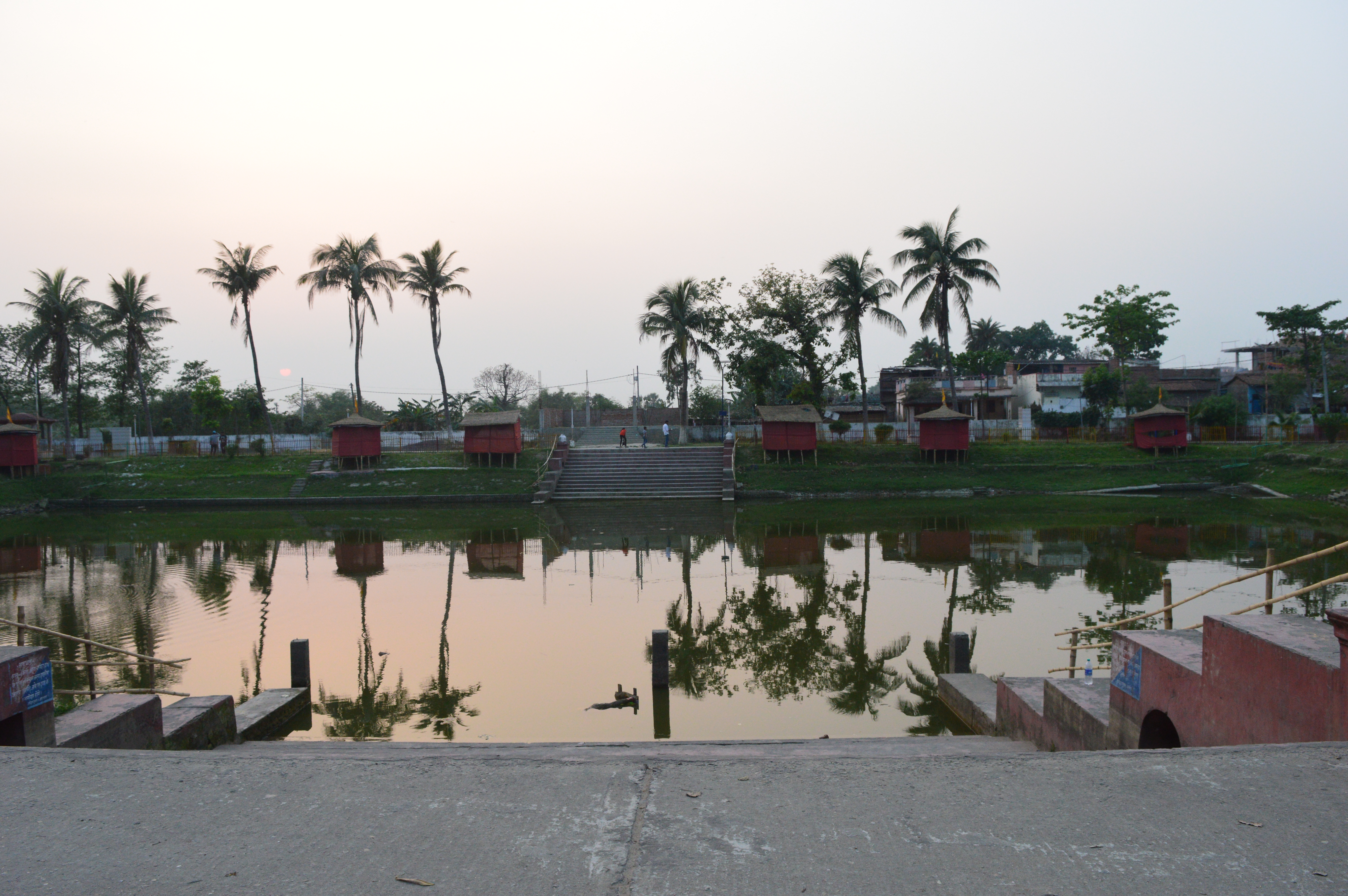 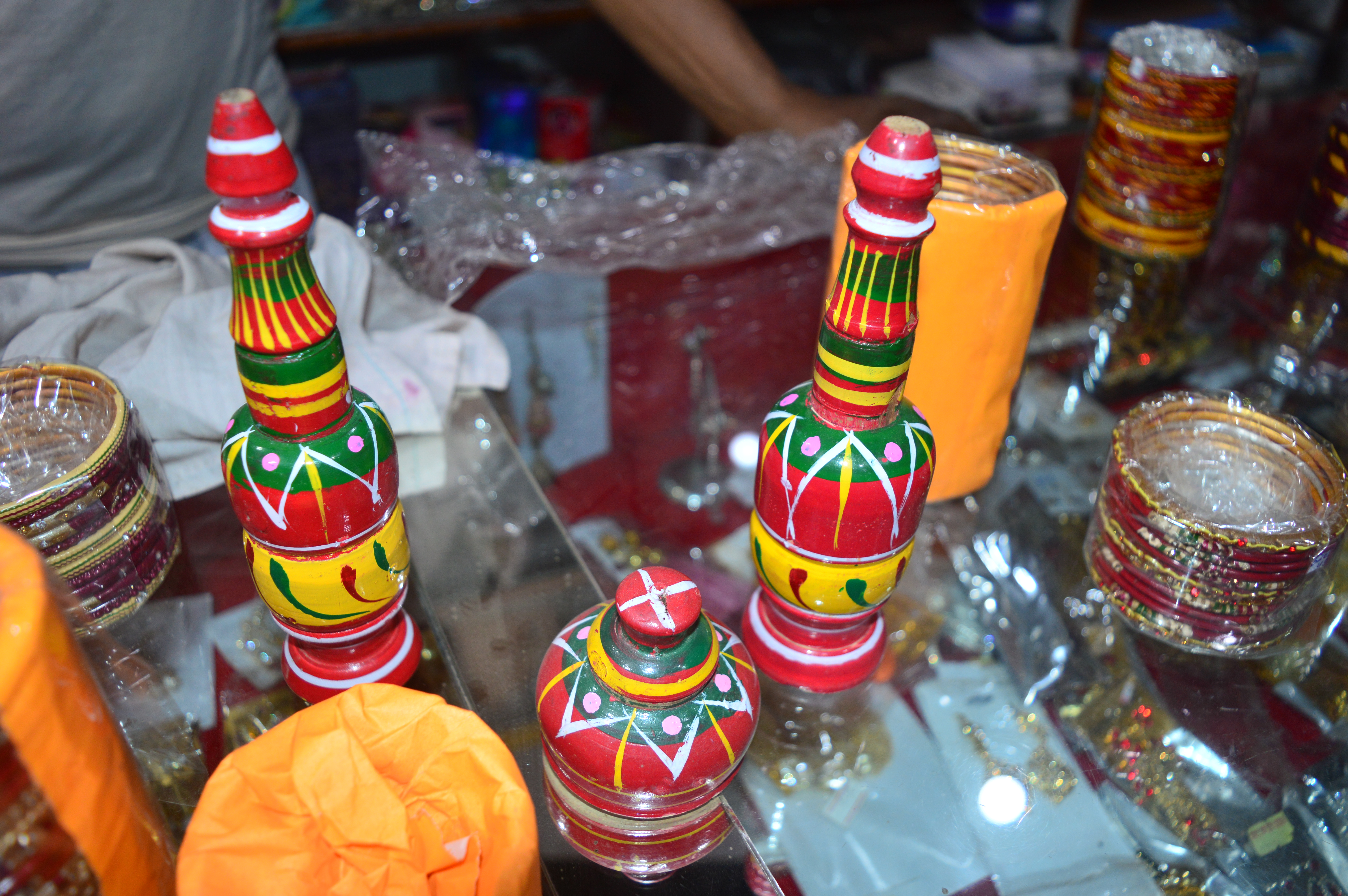 Honestly, with me, there is no row of libel or slander. I’m just keen to utter the truth. I didn’t like the hotel of Sitamarhi. We had a nightstay at hotel Janaki International. Whole Afternoon, there was no electricity. It came in evening and went again at around 2 am. They didn’t even have an invertor. Mosquitoes were biting and buzzing noises in our ears.
The toilet seat was broken.
The staff didn’t take the responsibility of their carelessness. They just excused that they turned on the generator immediately after the light went away. They further didn’t help us in picking up the luggage.
If you’re planning to visit Sitamarhi, plan a daytrip; it’s my suggestion. Staying here can pose a risk or even ruin your vacation.

This is the place known for lord Ram’s birth. We visited it two days before Ram Navmi. Here too, I don’t have even a single picture to share as photography wasn’t allowed. I’ve shared some grainy pictures on instagram stories for which you can follow me.
We visited Hanuman Mandir which is indeed a beautiful example of architecture. But I felt sad That our beloved Ramji is in a tent.
We also visited Saryu Ghat.