It has been observed through a few news channels and media portals that Ramanand Sagar’s Ramayana, that premiered in 1987 has been declared the most watched TV serial ever. Moreover, it got this title when it is re-telecasted on Doordarshan in 2020.

Inspired by this Sagar Arts came up with another version of  Ramayana in 2008-09.
Not only this, versions of Ramayana were also observed on Zee Tv in 2001 and in 2012. The 2012 version has been re-telecasted on &tv at 8 a.m in the morning. Alongside, there have been various other serials on Ramayana but based on any particular character’s point of view such as Jai Hanuman (1997), Sankatmochan Hanuman (2015-17) and Siya Ke Ram (2015-16).
Doordarshan was also declining, more often, they were just repeating their up to year 2005 batches of productions. Various attempts were made like a fresh batch of serials in 2014 and launch of DD Kisan in 2015. Still, quality of programs continued to suffer and audience size was still small then.
What made this TV serial and the channel so famous? Let’s analyse its marketing strategy.
It was already popular
Ramayan of 1987 is what prompted many people to get TV sets for their homes. Otherwise, who didn’t own one resorted to those homes which had televisions. People treated the cast the way as if they were really the deities. However, it was also the new age of television. Television was then, for people a magical machine.
Ramanand Sagar formed Sagar Arts which came up with with various projects of portraying various historical and religious events. They didn’t stop till this, but kept experimenting with various other themes as well.
Nostalgia
Most of the youth of this age have resorted to online series like Netflix or Amazon. The target audience of Television in India is still the middle aged. They saw it in their childhood, that is why they’re watching it again. Watching serials which were telecasted in their childhood triggers nostalgia in their minds. This nostalgia has acted as a marketing touch point. To draw young audiences, Shaktiman has been started because this is what we used to watch in our childhood. Various of my friends still watch Tom and Jerry, Doraemon etc. because they’ve certain vibes attached to them.
Watching on TV is a comfortable option
Series of every version of Ramayana is available on Youtube. But middle aged generation of India is hardly tech savvy. They’re relaxed to watch their serials on TV.
Timings
This is not the first time that these old shows have been telecasted on TV. In fact, Ramayana, Mahabharata and various other shows were also telecasted on Star Utsav many a times. Why is it that the series are successful only this time. Lockdown might be a reason behind this. All the people of India are sitting idle at their homes. In our country, watching TV is the first option to reduce boredom. Moreover, it was also marketed well this time.
Moreover, today is Hanuman Jayanti and Ram Navmi and Navratris also occured during the duration of this program. This might have been thought of an auspicious period to telecast this program again..
New shootings have stopped
Since, lockdown is for a big period of time, there are hardly any shootings going on. So, most of the running serials have stopped. This has cleared the market for old serials.
Social Media
There has been a constant meme war on social media and commentaries. Pictures of Arun Govil, who played Rama in Ramayana, watching his show with his family have gone viral. People are giving their inputs about how they felt after watching the show. They now have the social media in their hands, a power which they didn’t have then.
You can also read my other articles related to travel and education.
What did you feel about this post? Let me know in the comments below. 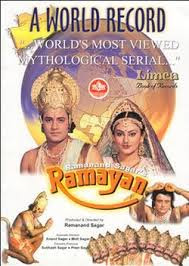